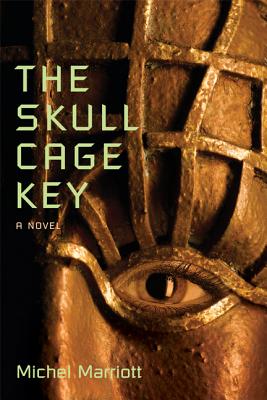 Read a Description of The Skull Cage Key: A Novel

The Skull Cage Key, the science fiction debut thriller by Michel Marriott; takes place in 2041 Harlem, centering on the murders of rich, white people. The novel has the essential elements of an excellent science fiction novel: creation of a futuristic world that is rooted in today’s reality and good solid writing. Unfortunately, the novel has one major flaw, the story layout SUCKS! The story, drowning in messy subplots that add extremely little to the major story line and uneven character developments; becomes a jumble of puzzle pieces that form an abstract, Picasso-like portrait where the nose is next the left foot, and the right ear is where a forehead should be.

The novel proclaims to have two plotlines running simultaneously. The first storyline centers on Reagan Reynolds; an old, overweight racist former NYC police detective who is royally ticked. Reynolds was kicked off the force and would love have his old job, his old life back. When a new drug epidemic hits Harlem - where the user injects a drug that allows him to experience dead rich white folk’s memories - Reynolds sees the solving of these murders as an opportunity to get his old job back.

For storyline number 2: Armstrong Black is a young black man not entirely pleased with his lot in life. During a Chinese New Year rendezvous with his female Asian boss, a group of men break in, busting Armstrong upside his head - knocking him out - murdering his boss/lover and taking her head. In the eyes of the police, Armstrong is a ’person of interest’. Armstrong goes on the run in order to find the murderers and clear his name. Soon Armstrong Black and Reagan Reynolds paths cross with deadly consequences.

I really wanted to like Skull Cage Key because I believe the science fiction genre in the African American literary canon should keep growing. All hope for Michel Marriott becoming a contributor to the science fiction genre is not lost. There are a few elements in the book that had my heart soaring. First and above all other is the fact that Marriott is an excellent writer. The writing is river rock solid. Marriott created a future and technology that is a foreseeable advancement. I actually got excited! In the midst of all of the technological advancement, there is a hard boiled detective story. Marriott created his characters and their interactions true to human nature. As my brother Richard would say, time changes’people don't. With all of the positives that Skull Cage Key has going for it, by the time I reached the end of the book I was so pissed off, I thought I saw Jesus.

The novel’s layout is terrible. Listen; there are stories and writing styles that are best suited using the chronological order treatment, this novel is one of them. Due to the unfortunate fact that the story does not unfold in chronological order, the story loses focus. Hell, I thought I had bumped my own damn head, because by the time I reached the middle of the book, I found myself in a mess with a headache.

The novel has too many subplots. A few of the subplots were nothing more than sucker branches on a tomato plant, adding nothing to the story, while taking away from the enjoyment of the story. For instance, there were a few lengthy chapters on Reagan Reynolds sister, Rikki, which should have ended up on the editor’s floor. Frankly, the Armstrong Black storyline was unnecessary and should have been eliminated. The Armstrong storyline was treated as an afterthought. The book begins with Armstrong and then the focus goes on Reagan Reynolds and stays there until the middle of the novel. Then Armstrong shows up for a chapter and then he’s gone, not to be heard from until another 3 to 5 chapters go by. Armstrong shows up for a chapter, two if I’m lucky, and then he’s gone again. What was the point of including Armstrong in the book; better yet include him on the flap cover of the book in the introduction as if Armstrong is a major player in the story?

Lastly, I had a few issues with the Reagan Reynolds character. Reagan Reynolds is not a likeable character. He has no qualities that would endear him to me. While characters do not have to be likeable for me to enjoy a story, the characters do have to be FASCINATING! Even though I hate Reagan’s guts, there should have been something about him that held my attention. If Vladimir Nabokov could pull this off with Humbert Humbert in Lolita, Marriott has no excuse for making Reagan as dull as two day old dish water.

There is an old standard that has been sung by most of the great jazz singers: Billie, Ella, Sarah, Carmen, etc, about the realization that love is gone titled ’It Shouldn’t Happen to a Dream’. Well, it shouldn’t happen to a book either. The Skull Cage Key had all of the makings of an excellent debut in the palm of its hands, but the flaws ruined it. I can only hope that with Marriott’s next book, he stays true to the major storyline, because too much of a good thing is just as bad as not getting enough of it.