Book Review: Caught in a Rundown 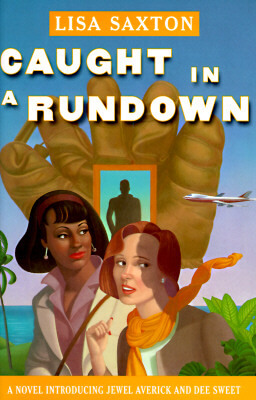 Read a Description of Caught in a Rundown

If this post isn’t a shining example of a recommendation, forgive me. I’m a little slow from not getting enough sleep last night all because of a book. I sure I’m not the only one who has sacrificed a good night sleep over a book. And I’ll happily do it again!!

Caught In A Rundown is the first novel by Lisa Saxton. It’s a mystery that has a very 90’s version of Lucy and Ethel combination dead smack in the middle of it. Jewel Averick, is a young, beautiful, and very self-centered African-American wife of Russell Averick, the center field man to the DC Diamonds baseball team. Dee Sweet, is the all around, All-American, whitebread wife to the DC Diamonds second-baseman Mark Sweet. These two women form the second coming of the Lucy-Ethel comedy team, with troubled marriages that lead them into an unknowingly dangerous mission, the finding of "Two-Mile" McLemore, a Negro League Baseball legend that many don’t believe ever existed. Jewel’s marriage is on the rocks because she sales one of Russell’s prized Negro League artifacts (he went to an auction instead of spending the day with her.) Dee Sweet’s, the white June Cleaver of the tale, marriage is in trouble because her husband comes home with the smell of another woman on his person. Jewel, during a tirade, finds an old mysterious note that is an apparent clue to a scavenger hunt that comes from the old glove of "Two-Mile" McLemore. Unbeknown to Jewel, there’s an old-time gangster that wants the clue. So much so that he’s willing to kill anyone that gets in his way. So set forth a mystery-type, comical scavenger hunt for the mythical "Two-Mile" McLemore. For many who are minor film buffs, the movie equivalent is the "It’s A Mad Mad Mad Mad Mad World".

Saxton not only manages to flesh out our two heroines, but she surrounds them with such a colorful supporting cast, that some moments is worth the price of the book. There are many. My favorite one is the introduction of Jewel’s grandparents, Mr. and Mrs. Brooks. I laughed so hard, I cried. I should have felt like a fool laughing so loud in the wee early morning hours with my bedroom windows wide open, I didn’t. Saxon also gives a tour of the various Negro League baseball fields along with the players. It gives the novel a historical flavor as well. For those who are not familiar with many of the players mentioned in the novel, it is well worth your time discovering a little about them on your own. Never to be forgotten.

Saxon does manage to give Jewel and Dee three dimension. Everything about the characters are soon revealed. The good and the bad. Their destroy, their motivations, revelations about themselves as women and their true feelings for their husbands. Saxon slowly unfolds this information as the two minor acquaintances becomes friends who cares about one another. With a wicked sense of comic timing and adventure that Saxon spread throughout this book, I truly hated for this one to end.

A perfect summer read. So when you go on vacation, and want to put on that "I’m so cultured that I bring books on my vacation" face, then this is definitely the book for you. Fair warning though, if you don’t want to give the appearance of being crazy because it appears that you are laughing at nothing and you can only say that "it’s the book" so many times without getting that "ain’t no book that damn funny" response look; then you may not want this book along. Save it for that rainy day, or any other day.

Read Scribner’s description of Caught in a Rundown.