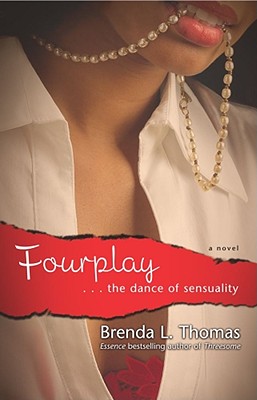 Read a Description of Fourplay: …the Dance of Sensuality

Phoenix Carter, Sasha's former boss and lover, hires her to repair his public persona, as a dedicated family man and all around good guy, which is being threatened by the growing negative publicity due to his gambling. Lyor Turrell also wants to do business with Platinum Image, but he has a secret agenda that could cause Sasha all sorts of trouble. Jordan Ashe is the new man in Sasha's life and could be the walking embodiment of the old saying ’everything that glitters Ain't gold’. Finally, there is Trent, Sasha's ex fianc’, who reenters Sasha's life wanting to be her ’friend’. Poor Sasha’what's a girl to do?

Fourplay was easy reading. For the most part, the story moved at a real nice pace, . Thomas balanced out the story well with just the right amount of drama and sex. With all of its positive attributes Fourplay had going for it, there were a few chinks in its armor. I will start with the good ones before I turn’hmmm’critical.

I like Sasha. She is feisty, intelligent and older than the 99% female lead characters that are usually featured in U-go-girl books. The manner in which she handled her men and sex life made her interesting. Sasha is the type of female character that I like seeing in mystery/suspense novels as a private investigator with a few guns and a couple of murders to solve.

Hold on, all is not well in Oz. With Sasha and the male characters, I would have preferred Thomas spending more time developing their characters. I kept thinking to myself as I read the book, ’that was nice and all, but can we go a little deeper?’ What Thomas had established with the characters were a nice launching pad which could have provided those with more define shape and various contours. Thomas stops right at the threshold that would make the characters thought provoking and complex, as if to maintain the light, carefree air that the story had generated.

Much to my chagrin, Thomas fell into the common trap that plagues U-go-girl books’designer name dropping. I know you all have heard me say it before, and actually I am getting tired of saying it, but designer name dropping is stupid. All it does is slow the rhythm of the story and gives the designers free advertisement. Basically, who gives a flip if a male character is wearing a Cartier watch?

There were spots in Fourplay that tended to get a little wordy. The beginning of the story moved like molasses during an Artic winter storm. It took a while for Thomas to get the story moving at a quick pace, as if she was unsure of how to start the book. As far as I was concerned, Thomas could have saved me and her some trouble by chunking the first 34 pages of the book. There were other moments in the book where it seemed that Thomas was simply adding unnecessary words to the story, which did not enhance it. For example, Thomas sent me through a one page (front and back) biography of a man named Ari. Ari was the person who instructed Sasha on the benefit of getting a business loan in order to start her business. Then Ari was gone. Look, I don't need or desire to read the life story of a minor character that shows up for a brief second or two never to be heard from again. Hell, I'm getting old; I Ain't got time to waste on frivolous characters.

Although it may not seem like it, I really did like Fourplay. Once the story got going, it flowed like a person running after his just repossessed car. There is promise in Thomas's writing style. I would not say that it is accomplished yet, but there is a real potential of Thomas becoming a good writer, if she commits to developing her craft. But, if Fourplay is the best Thomas has to offer, me reading her future novels are a road I would rather not travel.

Read Gallery Books’s description of Fourplay: …the Dance of Sensuality.