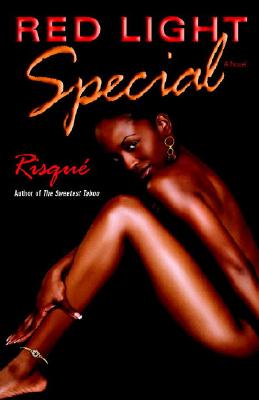 Read a Description of Red Light Special: A Novel

One day, I was in the mood for a Noire novel, but I had read all of them. I looked around my office and saw Red Light Special by Risqu’. I picked it up. Red Light Special is the first book I've read by Risqu’ and it definitely will not be the last. I liked the novel a lot. I have a major issue with the book concerning the sex scenes, but other than that the book is good. I was hooked and did not put it down until I was finished.

The book opens with a man and a woman doing the nasty, all over the place, ending on the kitchen sink with hot water running. Unbeknownst to the couple; they are being watched by someone obsessed with the man, New York mayor Kenyatta Smith. The watcher becomes more unstable and shoots Smith's companion, Eve, a high price hooker, in the head. Eve being dead, however, does not stop the mayor from his ’activity’. Yeah buddy, when that train gets rolling, it doesn't stop until it reaches its destination.

Monday Smith, the mayor's wife is tired of her husband's playing around and is ready to step but can't completely let go. The sex is that good to her. Monday's life starts to get complicate when her former fianc’e comes back into the picture and she crosses path with Collyn Bazemore. Collyn Bazemore is a madam of high price call girls. Soon Collyn and Monday will be drawn into the Eve's murder investigation with devastating results.

I liked Red Light Special a lot. The story moved at a reasonably fast pace. The characters were fairly developed. The sex scenes were mildly exciting. Red Light Special is a nice book. It's not deep. It is a nice comfortable, Calgon-take-me-away book. But, I still had a few issues with the novel.

My major problem with Red Light Special was the sex scenes, not the content of the scenes but the repetition of the scenes. The scene that opens the book, where Kenyatta has Eve, the call girl, on the kitchen sink with her back facing the facet and hot water running; is repeated in the book. Now the sexual encounter is several pages long. Already the scene threatens to reach the same stage of boredom as watching porn 15 minutes past the nut; but to repeat it, and then repeat it where it looks like a cut-past job of the first scene is unacceptable. I'm like, Ken, brother man, can you like try another position, throw a curve or something in it? And the women were stupid. I felt like shouting, heifa, if the water is scalding your dumb ass, turn around and cut it off.

All that said I liked Red Light Special. Risqu’ has reached the same level of respect and admiration that I have for Zane or Noire; she's well on her way. I look forward to Risqu's next one.

Read One World/Ballantine’s description of Red Light Special: A Novel.