Book Review: The Apostles: A Novel 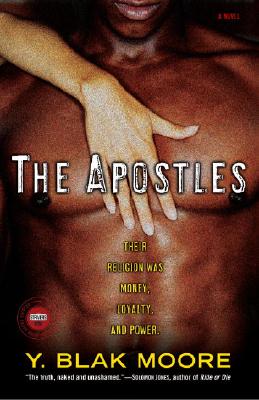 Read a Description of The Apostles: A Novel

Y Blak Moore's second novel, The Apostles, started with bang and finished with the finesse of a water balloon kissing a concrete sidewalk. The novel about gangs in Chicago showed the whole spectrum of my love/hate relationship with Moore's writing. The storyline was nice, the characters were adequate, but the downsides were Moore killed time on characters and events that were inconsequential, the story's pacing was off, and the ending sucked! I have read better, and I certainly had hoped that Moore would have written better than The Apostle.

The Apostles follows the life of ’Solemn Shawn’ Terson, who was sent to a juvenile reformatory when he stabbed his stepfather, to become the leader of The Apostles, the most prosperous and organized gang in Chicago. As the book begins, Shawn is ready to leave the gang life and he plans on getting out of The Life with an act of social redemption by building a large neighborhood recreation center. When Shawn finds out that his girlfriend is pregnant with their first child, his desire to get a fresh start is intensified. Shawn soon realizes that gang life is like credit cards, its hell getting out of it once you are in serious trouble.

I have some major issues with The Apostles. Where do I start? How do I count the ways, unfortunately, very easily? First, the book should have been titled The Apostle, for that would have been more accurate. The book centered on Shawn. I don't have a problem with that; my problem is that Shawn was not fully developed. He was developed enough to get the job done, but there were dimensions of him that was begging to be explored, which Moore turned a deaf ear. For instance, what made Shawn, a borderline genius, turn to the ’Life’? Moore carried me through the events that led to this, but not Shawn's mindset. Did Shawn have a sense of morality, right or wrong, before his mother married and abusive man? Was there an inner conflict inside his soul? I would have loved to know.

Two, the second major problem I had with the book is Moore's treatment of a few storylines and characters are shabbily done, to say the least. A sub plot will start off nice, hit a mellow groove, only to either be abandon or hastily tied up in a simplistic conclusion. For instance, what happened to the stepfather that Shawn stabbed? Moore mentions a ’rsquo;stepfather’ every so often after Shawn is released, but Moore did not clarify if this was the same man. Next, Shawn's mother totally despises him, cusses him out, and just acts a damn fool whenever Shawn's name is mentioned. Why? The Terson family dynamics is not explored. Moore missed an excellent opportunity to flesh out Shawn's true character. I will not get into my other objections of subplots because it would give too much of the story away. I can say that the ending, that damn ending was atrocious. I was unsatisfied, shocked by its abruptness, and simply pissed off!

The Apostle is also guilty of committing the same sin that most ’urban’ novel these days fall into: inserting a romance when there should not be one. I believe that this is such a ridiculous practice that it should be outlawed. Why make such a blatantly obvious move to appeal to the black female reading audience? Well, I know why, for the money. But, this practice is Hell on a story, and The Apostles paid a serious price.

Overall, I was disappointed by The Apostles. For a sophomoric effort, I expected Moore's style to have been more polished. The structural problems with the sub-plots are messy. The Apostles could have been a remarkable book’if it was written by somebody else.

Read Strivers Row’s description of The Apostles: A Novel.