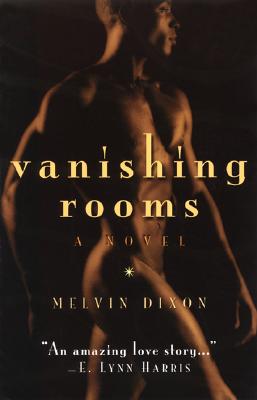 Read a Description of Vanishing Rooms: A Novel

Upon my first glance at Vanishing Rooms, the debut novel by the late poet/novelist Melvin Dixon, I thought -- in my mind's voice that sounds like Billie Holiday (I don't know why it does, it just do) -- "Hmmm, there's a naked man on the cover’. After reading the book I concluded that the cover is a good indicator of the novel's messages. Vanishing Rooms is an intricate, passionate, hypnotic book that strips away the weight and fa’ade of class, race, and self, leaving the characters' essences exposed to such a degree of nakedness that I wanted to look away. Vanishing Rooms is not for the weak-hearted, the weak-minded, or any one who is unsure of their place in the world. Vanishing Rooms is a novel about emotional and spiritual movement and is more than a reflection of life; it is an examination of the soft, rumbling flow of life's undercurrent.

Vanishing Rooms is a based on relationships. Jesse Durand, a black male dancer, is mourning the death of his white lover Metro. Jesse soon encounters Ruella McPhee, another dancer who falls in love with him. And there's Lonny, a 15 year-old white boy who is a member of the gang that killed Metro. Jesse, Ruella and Lonny's lives inadvertently become connected, making Vanishing Rooms is a tale of love, lust and movement.

My first impression of Vanishing Rooms was one of pain. In mourning his lover's death, Jesse must confront the true nature of their relationship. Also Ruella's coming to terms with her past, and Lonny's dealing with the death of his father, and his own sexual confusion are painful to witness. I felt as if I was an intruder in their hearts and minds, seeing sorrows and bruises that should only be viewed in the privacy of one's own soul. I reacted to Vanishing Rooms in the same manner as when I'm watching a newscast of a mother mourning the senseless death of her child. I usually turn my head from the TV screen or flip the channel; it's the only privacy I can offer her. I actually found myself turning my head in a similar way as I read about Jesse and Ruella going through their own individual pain, attempting to give them the privacy to face the truths they have to bear. After a second or two, it dawned on me that I was reading a book.

I do believe that as I get older and read more books, I prefer novels that dig deeper than its characters' most superficial layers. Author Melvin Dixon knew human nature and constructed his characters as human beings with issues. (And boy, do these characters have issues!) Unlike many other novels, by the conclusion of Vanishing Rooms, the characters still have issues ’ just not the same ones they started with.

Dixon combined his poet's sensitivity and observation of the human spirit, with a master wordsmith's agility to create Vanishing Rooms. Coupled with the unblinking, non-judgmental eye of a camera, and the hypnotic power of a fresh crime scene, Vanishing Rooms provokes instantly recognizable emotions from both its characters and readers. Vanishing Rooms is the rare novel that features 20-something characters that aren't the stereotypical fare of popular AA fiction. Vanishing Rooms is the best kind of literature: intelligent, graceful, free of arrogance and pretense, rooted in reality and emotionally accessible.