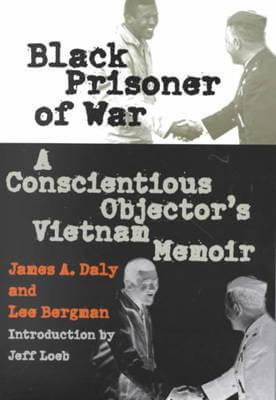 by James A. Daly and Lee Bergman

Read a Description of Black Prisoner of War: A Conscientious Objector’s Vietnam Memoir

I can't honestly tell you when I started watching war movies and reading books written about the American wars. In my younger years, I considered the subject of war to be boring. I remember many years ago, when my father was still alive, the family watching the movie Midway when it was broadcast on NBC. My mother reading a book while my brother and I were bored out of our skulls. It’s not like I could jump up and change the channel (oh yeah, days before the remote control-my father use to say he had two remote controls, my brother and me). When my father was home, the TV was HIS TV, hello Midway, screw you Three’s Company. *LOL*

My mother and I went to see Apocalypse Now during its first theatrical release. We both feel asleep. Instead of me watching the movie, Apocalypse Now was watching me. Our mutual snoring woke us both up. It wasn't until I saw the movie Platoon that my interest initially peeked. I didn't go to the movie theatre to see it. didn't give one wit about it, at that time. Then it won a bunch of Oscars and all that did was raise my eyebrow enough that I did see the movie when it was broadcast on HBO. It was all right. I didn't fall asleep on it. I was doing a little better.

Hitting the fast forward button: when I was getting my degree, we had so many credit hours that were set aside for elective classes. Cakewalk classes to my fellow engineering student; English literature, creative writing, Intro to Sociology, you all knows the classes I’m talking about. Any class that didn't discuss about the umpteenth association and derivation of Ohm’s Law and its integrals up close and personal intimation of thermodynamics theorems was a Cake Walk class. Which explains why I was half awake-half dozing through an American History course. It was there that I first became aware of a book titled Bloods by Wallace Terry, which told of the Vietnam experience by the AA servicemen point of view. Bloods was one of the required books of the history class. Geez-us be a fence, I’m not feeling’ this war shit, I initially thought as I bought the book in the university bookstore. I had to read the book. I did and found it fascinating. I can't tell you why. I do know that I’m no longer bored by war movies and reading books about wars.

Hitting fast forward again: a couple of months ago Black Prisoner of War: A Conscientious Objector’s Vietnam Memoir by James A. Daly and Lee Bergman came across my desk. Immediately I was interested. I hadn’t heard of a black POW before. All I knew of Vietnam POWs were John McCain and Rambo. Not good reference points I’m afraid. I was intrigued by the AA POW angle. Add to that James Daly called himself a conscientious objector TOO? *eyebrow raised* I was more than intrigued. I was hooked. Oh, I gots to read this. And I did. In a simple, straightforward manner Black Prisoner of War engulfed me in the life of James A. Daly and his years as a POW and when he had returned home. Fascinating, moving, and enlightening, Black Prisoner War is a book that demands your attention. It certainly held mine with an iron grip.

James A. Daly was a young, 18 year old AA man growing up during the 60s, wanting to be a chef and a Jehovah Witness minister, scared of being drafted in the Armed Forces and sent over to Vietnam. Daly had been studying to become a member of the Jehovah Witness ministry for a good many years. War, being in the Army, went against his religious training and beliefs. Acting on misguided information, Daly was feed some okey-doke and believed that if he enlisted he could then file the necessary forms to be classified as a conscientious objector and serve his duty as a cook. What Daly thought he was going to get and what he actually received was two entirely different things. Daly was flown to Vietnam and found himself on a suicide mission, with a gun that he refused to use and didn't maintain. Daly eventually became a POW. Along his journey, Daly wrestles with his religious beliefs and his humanity.

I found Black Prisoner of War compelling. I definitely got an education. Daly came across as a very nice man. As the book stated, Daly was the type of person that found the glass half full, not half empty. The problem that arises from being a half full glass type of person is that everything that could be seen is not. While Daly touched on a little bit of everything, there are some conclusions that I didn't buy. Admittedly, I’m a cynic. I can't believe that Daly fell for some of the Army’s treatment. For instance, he actually believed that a couple of his white officers were backing him, supporting him when he applied for his conscientious objector status. I chalked some of this to his fear of ending up in Vietnam. I said some, but not all. Come on now, this is the white man’s Army conducts you accordingly. The second issue that I highly dispute is the issue of sex. Surely to goodness, some of those men had to fall into, rub up on, stalk, do sumpin’.

Daly did drop a nugget or two of knowledge. Basically, the treatment of POWs, or at least what he encountered during his four years as a POW. The bombing of Vietnam cities while the Nixon was supposedly in peace talks. It was an education. Are the facts that Daly stated in the book true? I can't say for sure, but it does leave plenty of room for doubt after hearing the standard US version for years.

Strangely enough, I don't have the opinion that Daly was putting on an act or giving the impression that he was a black version of Opie Taylor. I tried to detect some slight or crack in Daly’s niceness fa’ade. I couldn't find any. Hell, I just liked the man.

Black Prisoner of War: A Conscientious Objector’s Vietnam Memoir is above all a moving account of war, survival, and a man coming into his adulthood. I don't know if I could have stuck to my principles as solidly as James Daly did being surrounded by violence and death. I really couldn't say. The book stands as a testament to Daly’s character. The book was originally published in 1975. The edition I read, which is currently being published by the University Press of Kansas, is Black Prisoner of War’s second chance at finding an audience. If you love biographies, history, and/or willing to expand your knowledge of our place in the military history of this country, I highly recommend Black Prisoner of War.