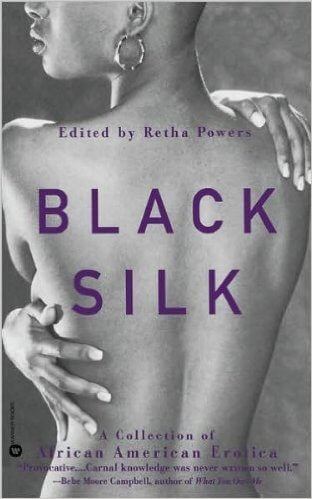 Black Silk: A Collection of African American Erotica is an anthology that cheers the sexual, sensual side of African-Americans in literature told through short stories by some of our leading contemporary fiction authors. Black Silk best demonstrates the qualities of what comprises a fine anthology by displaying various writing styles and subject matters. The two elements that I love best about reading anthologies are reading new material from my favorite authors and introducing new authors, new voices that are dawning on the horizon. Black Silk has its shining moments, the so-so moments and the I definitely-wouldn’t-have-went-there moments. I found Black Silk entertaining and profound in its best moments, and terribly boring in its worst.

In Black Silk, popular authors: Bernice McFadden, Eric Jerome Dickey, Breena Clark, Camika Spencer and others, wrote short stories that covered a wide range of emotions, sexuality, and sensuality. Bil Wright’s Jalapeno Love features a middle age widow who has an itch scratched with a funny consequence. The Dawn of Our World by Carolyn Ferrell is one of the stories that I hoped to find, not to say that I was looking for this exact story, just a unique one. It’s the story of a young boy falling in love with an old woman who instructs him in the art of sex. Bernice McFadden’s One Night Stand further confirms her emerging status as one of our distinguish authors as she brings fresh air to a tale that we are all familiar with. Planting by s smith is one of my favorites stories in the collection, definitely erotic. Planting is a short story of a married couple who, when a glance, or a raised eyebrow ignites half-hearted glowing amber into a raging fire sexual encounter. The Warm and Quiet Storm by Andrew Oyefesobi was a good one as well as Camika Spencer’s Me Between My Own, and Breena Clark’s Fucking The Fat Man. Jacqueline Woodson’s Kiwi is wonderful. I am now officially a fan of Woodson’s. I can't wait for her next adult literature outing. Finally, in my opinion one of the best stories in the entire anthology is The Blue Globes by Thomas Glave. Initially, I didn't quite know how to take the story. I thought it was strange. By the time I got the rhythm of it, I was knee deep into the story. These stories alone made Black Silk well worth the time it took me to read it.

I had a few expectations concerning Black Silk before I began reading it. I was not anticipating the usual sweaty bump and grind that I normally read in contemporary fiction. I’ve been there, done that. I wanted the book to take me places that isn't normally investigated in contemporary fiction but happens, or had happened, in everyday life. I was left unsatisfied.

The downside to Black Silk is that it covered the same ground over and over again. The stories were often interchangeable with interchangeable characters, nothing different or out of the ordinary in today’s contemporary fiction. But, I wanted different-turn it a little to the right, to the left, stand it on its head. Something. Do something. Say something different. It’s easy to run a plow over ground that has already been broken, turned over, and rained on. These stories either focused on the first sexual encounter of a relationship or encounters of the hit-it-and-quit-it nature. What’s new about these experiences or interactions? Black Silk just barely scratched the surface of African-American erotica, not in quantity but in content. Black Silk was hittin’ at it, hittin’ at discerning old ground, discovering new dimensions, of our erotic selves. Instead of hittin’ at it, Black Silk should have been trying to knock its bloody head off!

Black Silk was more than a little heavy on its lesbian theme stories. The fact that Black Silk leaned so much on the man-woman, woman-woman relationships; it made the absence of the man-man relationship glaringly obvious. Ah, before y’all get y’all pitchforks out to storm my castle, let me state up front that I’m far from being anti-lesbian or homophobic in any fashion. The anthology had one gay theme story, The Blue Globes, which ironically is one of the best stories in the book. To leave the man-man aspect out of the anthology seems unfair and loaded with implications that I ’m sure the editor wasn't trying to convey, but left open for speculation.

I had a hard time reading through Black Silk, because the stories were so similar and didn't demonstrate enough diversity; at times it didn't hold my attention. Reading the book was like watching a porn movie, it’s only good for the first 5 minutes; by the 10-minute mark you're either asleep or wishing you were. I had to break up the reading of Black Silk, in order to keep a fair amount of interest in the stories going. Which is not a bad thing. One of the best things about anthologies is the fact that you can put the book down, and come back to it without having to remember characters and plot lines, things that are difficult to do, especially if the memory is going. But, I did start and finish two novels before I ultimately finished Black Silk.

All in all, Black Silk is a decent anthology. It could have been bolder, delve into more avenues, dug a little deeper in its subject matter, yet I didn't feel that I wasted my time reading it.