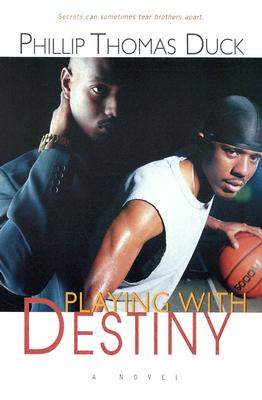 Read a Description of Playing With Destiny

As incredible as it may seem, I’m a tad bit in shock. I recently finished reading and actually LOVING a novel published by BET under its Sepia imprint; Playing with Destiny, the debut novel by Phillip Thomas Duck. I know some of you may be wondering if I have something against BET publishing company; not really, but more on that a little later. Right now, I would like to focus on Playing with Destiny. I loved Playing with Destiny! A novel which centers on two brother’s lives and how their secrets have destroyed them; Playing with Destiny is a well crafted tale that captured my imagination and held it in a vise-like grip. The novel is a wonderful introduction to a fine new talent.

Colin Sheffield has issues. He is a talented novelist whose novels receives critical acclaim but doesn't sell well. His marriage is in trouble, even though his wife Liza is about to have their first baby. To put the cherry on the cake of Colin’s misery, the secrets he has been keeping are threatening to come out.

Courtney Sheffield, Colin’s younger brother, is going through his own dilemma. A promising top draft pick for the NBA, Courtney’s once strong and loving bond with is brother has been shattered. He feels nothing but jealousy and hate for Colin. Courtney’s own secrets are about to take a toll on his life as well, especially those concerning his true feelings for his former girlfriend Chante’ and if Chante’s daughter, Destiny, is his or another man. Ah, what a tangled web we weave’.

Playing with Destiny is a fast pace, intelligent, emotional read. I have been asked a few times what do I mean when I say that a book is intelligent. Using this novel as a perfect example of an intelligent novel; this novel has no holes in the logic of the story or the character’s actions. Although the characters make plenty of mistakes that spice up the story, I can mentally and/or emotionally understand where the characters are coming from. Characters should not have to go out of their way to be stupid in order to keep the drama going. The Sheffield brothers and the rest of the cast of characters are wonderfully developed and perfectly flawed. Duck created characters that are believable and leaped out from the pages of the book.

Playing with Destiny is constructed in a manner that makes sense. There are no big surprises that come from left field.  Another important attribute the novel possess is that Duck did not attempt to subliminally preach to me or base the story on a not so subtle social message. Duck stayed true to the story and his characters. Playing with Destiny is solid fiction; fiction that exists solely because of the story and not an elongated Sunday school lesson. Give me a story; tell me a tale that’s all I want. Duck gave it to me.

I have to be honest here, another reason I love the book is some of the things that Duck had coming out of Colin’s mouth concerning today’s publishing industry. *big smile* Duck is a man after my own heart. You know I’m with you when you're right. *LOL*

Frankly, I can't believe that BET published Playing with Destiny. On the discussion board I was asked if I had any aversions to BET published books. The answer is yes I do. Every book that is sent to me by BET is the same book over and over again. The books are not about real relationships. They are about AA women dreamships, our own color me black version of the Cinderella fairy tale: the sista-girlfriend books about the woman who either ain’t got a man but is trying to get one or she has a man and can't hold on to him’ but the sista-girlfriend always end up with A man. Let’s face it; all of these books are past the point of being predictable. So, I have adopted the cynical ’been there done that, not only did I buy the damn T-shirt, the damn thang is so raggedy I use it for dusting’ attitude, but BET pulled a fast one on me when they threw Playing with Destiny at me.

Playing with Destiny is a terrific novel. Phillip Thomas Duck shows great promise as an author. I am looking forward to reading his next one.