Book Review: Moses And The Monster And Miss Anne 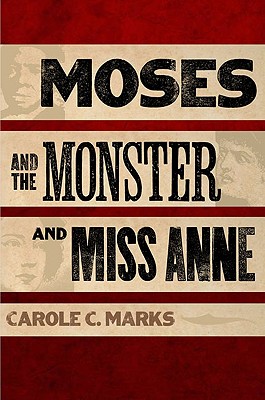 Read a Description of Moses And The Monster And Miss Anne

I admit that the things that form my initial impressions of a book are somewhat shallow. I love a good book cover, whether it is pictures or illustrations or even a title with a beautiful background. I also like for a book to have a title that immediately captures my attention. Moses and the Monster and Miss Anne, a slim history book written by Carole C. Marks caught my attention by its title. Moses and the Monster and Miss Anne is composed of small biographies of Harriet Tubman (Moses), Patty Cannon (the Monster), and Anna Ella Carroll (Miss Anne). This brief volume describes the lives of these three women, who at one time was each labeled as "dangerous", touched on each other lives in early eighteenth century Maryland. Tubman, as I am sure everyone knows, freed herself, family, and others from slavery. Patty Cannon was a thief, barkeep, and kidnapped free blacks to sell them back into slavery down South. Anna Ella Carroll was known as Miss Anne, a woman who gained power from working behind the scene in politics to advise and influence some of the most powerful and famous politicians in her time. Moses and the Monster and Miss Anne is a wonderful book, which I would highly recommend.

I began this book somewhat arrogantly because I already know about Harriet Tubman. Tubman is one of the staples of Black History Month. I began this book smugly believing I knew enough about Tubman that I did not need to read this book to become more knowledgeable. I wrongly believed that Marks could not tell me anything new about Tubman. I was WRONG. I learned a great deal about Harriet Tubman from this book. For example, I did not know that Tubman had a working relationship with John Brown, the abolitionist; nor the role she played during the Civil War as a military strategist and as a nurse; and how she was NOT paid for the work she did for the Union Army. I did not know that after the war Tubman lived in poverty, but had a generous and giving nature. The Tubman biography shined like new money in water.

Anna Ella Carroll, I did not know anything about this woman until I picked up this book. Tubman is the most famous of the trio. Carroll, I did not care one whit about her. The more I read about her, the more interesting she became. Carroll was taught law by her lawyer father at a time when it was unheard of a women going to law school. Carroll became involved in politics, but through the back door for it was not proper for a woman to be openly involved in politics. She became a lobbyist, wrote pamphlets and became a political insider who advised Presidents Fillmore, Lincoln, and Grant. The Carroll biography reads like a movie. Truthfully, I’m surprised that a movie had not been made of this woman’s life.

While the title caused my eyebrow to rise, it was the brief summary of the Monster, Patty Cannon, which made me want to read this book. Cannon and her husband owned a tavern and ran a second business; the kidnapping of free blacks, placing them in bondage and transporting them to other states to sale them into slavery. While Cannon was my sole reason in reading the book, her biography was the least enjoyable.

Marks treated Cannon’s section with the slightest amount of storytelling finesse, but I can’t blame entirely blame Marks. Cannon did not leave a legacy of letters as Tubman and Carroll. Marks could not create a narrative on the same par as Tubman’s and Carroll’s and be historically correct or have the solid foundation in which to make any sort of assumptions. Intellectually, I understand the position Marks was in; however, Cannon’s brief biography sucked as a story. Cannon would have gotten a far more readable treatment if her biography was in the form of a historical novel than as a standalone biography.

I love historians who are historically accurate and yet can put those facts together and fashion a readable, highly enjoyable story. Marks is one of those historians. Tubman’s biography is absorbing and flows like river. Carroll’s section reads like a movie waiting for a camera and the actors to show up and perform. The sections that impressed me the most are the chapters where Marks put each of these women and their activities in historical perspective. Even though the volume is thin, a little over 200 pages including indexes and footnotes; Marks generated three fully realized women and their place in US history.


Read University of Illinois Press’s description of Moses And The Monster And Miss Anne.