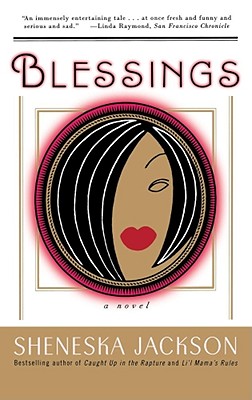 Read a Description of Blessings: A Novel

Blessing is the third novel written by the author of Lil Mama Rules and Caught Up In The Rapture, Sheneska Jackson. Blessings is the story of four women who work in a beauty shop named Blessings. There’s good news and bad news. Let’s start with the bad news. I was disappointed with this novel. A case of trying to do too much in too little time.

The novel stars four women. Pat is the owner of Blessings. Pat’s problem at the moment is her inability to have children. After medical tests, and a failed adoption attempt, Pat is suffering from depression. Her husband, Mark, bought the beauty shop as a way to bring her out of her depression. Faye is a widowed mother of two. Faye does braiding and hair weaves at the shop. She is overweight and suffering through single parenthood. Zuma is the star stylist of Los Angeles, she is also the youngest member of the shop. Zuma has ego and attitude. She also has a master plan, including having a baby, and owning her own shop at the age of 30. She plans to be a single mother…Superwoman. Like that old saying goes, If you want to show that God has a sense of humor…make plans. Sandy is the last of the troupe. She is a white woman, former stripper, who is hired to do manicures, answer phones and help out around the shop. Sandy was raised in an all black neighborhood in Compton, so she can give plenty of attitude when she has to. She also had two children that she can’t stand just to please her boyfriend, Cerwin. She also has a little problem with jealously. Now, don’t be fooled into thinking that this is a Waiting to Exhale in a beauty shop…WRONG!!

The main problem is that Jackson is trying to do too much in too little space. Each of the women’s stories are novels in their own right. Pat’s new attempt at adoption, Faye’s struggle with her children, Zuma’s master plan, and Sandy’s world could all be novels. Jackson tries to do that, but she doesn’t give enough time to how their friendship starts and develop. This leads to problem number two, Jackson’s time line. Jackson has the drama in this novel taking place in the span of a week. For instance, Pat’s storyline has her meeting and bringing home a child she has not meet, taken away from the only parents she knew, and living with Pat and her husband Mark in ONE week. I think not. Zuma’s storyline isn’t developed enough. She has a man that makes all of these promises, and Miss Zuma has been there and done that. And then the man drops out of the novel, never to be heard from again.

Another problem is I don’t need to know EVERYTHING!! Check this out. Sandy is going to Cerwin’s club to confront him. Jackson decides that the reader needs to know how she reaches into her purse to get some money. She has no bill smaller than a $100 that Cerwin had given her for the kids. Jackson then goes on to describe her walk to a gas station and the conversation she had in order to get the $100 bill broken in order for her to catch the number #19 city bus and then transfer to a number #6 bus and then walk the half mile to get to Cerwin’s club. Is this really necessary? Did I ask for directions or what?

Because Jackson alternates chapters bewteen characters, it seems that just when I’ve gone through these “in-depth“ descriptions and finally get to some story, the chapter ends and we are own to the next character. When does this supportive friendship come in? It doesn’t.

I am not happy with this book. Jackson has done better. Is there a trend happening here that I don’t know about? What is with all of these authors writing books that are filled with words but the words are adding nothing to the story. I thought accusing an author of getting paid by the word was an insult. Like James Brown said, Talking Loud and Saying Nothing. Blessings has four novels cut and pasted into one. It’s a shame. The potential for each is so strong, that I felt that if she had just focused on one, Blessings would have been a far better book. In it’s present form I was left with so many questions that it is shameful. The main question that I was left with was what does a book editor do and how can I apply for it, because the one for this book should be fired!

For Miss Jackson: Here’s a tip, babygirl, every author can’t be Toni Morrison. It’s not the amount of words that makes a book, it’s the power behind them. Peace.