Book Review: A Death in Texas: A Story of Race, Murder and a Small Town’s Struggle for Redemption 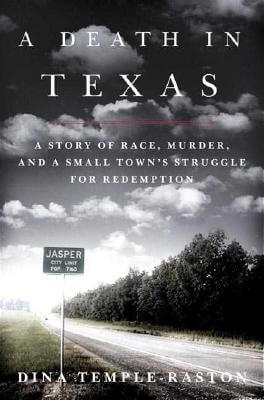 Read a Description of A Death in Texas: A Story of Race, Murder and a Small Town’s Struggle for Redemption

Upon hearing of the dragging death of James Byrd, Jr. in his hometown of Jasper, Texas, it occurred to me that "A new way of performing the act of lynching has arrived — just in time for the new millennium". African American resident James Byrd, Jr. was beaten, chained to a pickup truck and dragged over three miles to his death. A Death In Texas by Dina Temple-Raston closely scrutinizes and reports what was said behind closed doors about the gruesome murder that propelled this small Texas town onto the world stage. A Death In Texas is a why-don’t-you-leave-me-alone-can’t-you-see-I’m-reading-a-page-turner kind of book!

I knew I would regard A Death in Texas’ accuracy with skepticism. I recently read another non-fiction account of an event that centered on the murders of African-Americans at the hands of white groups, where I believed the author shaded the truth. I wondered if Temple-Raston would be able to express how Jasper’s black community felt and reacted in a truthful, objective manner. Would Temple-Raston, being a white woman, be able to persuade any member of Jasper’s black community to trust her enough to discuss the murder and its aftermath? Upon finishing A Death in Texas, I believe Temple-Raston did whole-heartedly accomplish these goals. I have a strong suspicion that because of her status as white, she gained an access to the white community’s real opinions, that went far beyond the public image that Jasper attempted to project to the worldwide audience. Temple-Raston was able to represent both sides of this racially polarized town, and because of her evenhanded treatment the two halves of Jasper were opened before my eyes. I found it all fascinating.

The author’s writing style is smooth and lyrical, almost elegant. Temple-Raston struck a good balance among reporting the crime, providing the facts, offering the conclusion, discussing the fine points of the legal case and analyzing the discussions held among Jasper’s community leaders. All of these events were told in a fluid, luxurious voice. There were moments in the book that reached the lofty heights of Truman Capote’s literary masterpiece In Cold Blood in bringing Jasper to life and laying it bare as one would gut a fish. A Death in Texas exposes the horror of the James Byrd’s murder with the rhythm of a soft, gently told lullaby.

I appreciated the author’s epilogue on Jasper’s return to "normal, everyday life". All of the what-ever-happened-to questions were answered. I have no complaints…well, maybe one. I didn’t see the purpose of the 12th chapter, "Death Town, USA", which relates the history of Huntsville, Texas and its same-named prison in which Byrd’s murderers are being held and will be executed. The only sections in this chapter that seemed relevant related a few of the murderers’ experiences while incarcerated in Huntsville Prison. The rest of the chapter could have been left on the editor’s floor. The pace and flow of the book slowed to a crawl. Since "Death Town, USA" was next to the last chapter in the book, I suffered through it.

A Death In Texas is an excellent book. It provides a stirring and thorough account of a murder that rocked a town, and offers another loud example that race relations are STILL dishonest and secretive, and that racism is alive and doing just fine, thank you very much. A Death In Texas does more than examine James Byrd’s murder and the subsequent trials; the town of Jasper is turned inside-out, with all of its creepy crawlies and damp dankness exposed for your viewing pleasure, (although there’s nothing pleasurable about it). After reading A Death In Texas if anyone in my proximity utters the phrase "I long for those good old’ days" to evoke America’s past, I will shudder and simply reply, "you need to go to Jasper, Texas, quick, fast, and in a hurry".

Read Henry Holt & Company’s description of A Death in Texas: A Story of Race, Murder and a Small Town’s Struggle for Redemption.