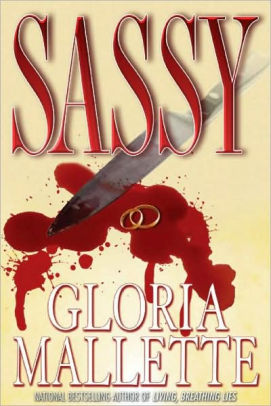 Read a Description of Sassy

Gloria Mallette is one of my favorite authors. I became a major fan after I read one her earlier novel, Shades of Jade. Over the years she remained one of the few authors who consistently produced one excellent novel after the other. So, it is with great pain that I must express my opinion of her latest novel Sassy. I did not like the novel. My problem was not with the story line, which was pretty decent. The thing that soured me on the novel was the number of grammatical/typographical errors sprinkled throughout the novel that running a grammar/spell check over the novel would have eliminated. Due to these errors, the story soured and my reading experience was ruined.

Sassy Davenport, the title character, is a popular African-American romance author. During one book signing/reading she meets Norris Yoshito. He turns out to be the man of her dreams. Norris Yoshito is a handsome architect who fall head-over-heels in love with Sassy. Everything that glitters aint gold and Sassy is reminded of that during her relationship with Norris. Norris has major issues with his past, his African American/Japanese parentage, and the fact that he is under suspicion of having committed several murders. Sassy soon finds her life in jeopardy and does not know if she can trust Norris or not. She will have to choose one or the other because her life depends on it.

As I stated earlier, I have a major issue with this book. Sassy is that it is riddled, RIDDLED, with misspelled word, grammatical errors, and misprints. Nowhere in publishing are these types of errors acceptable. In my opinion, it’s a sign of major disrespect to the book buyer/reader. There is no rhyme or reason for this type of oversight. Mallette is not the first author who has committed this sin. Ordinarily, I would not have put her in that group of authors who would put this type of product out for public consumption. If Mallette is capable of this, maybe I need to talk to Troy about going into business as copy editors.

However, I managed to finish the novel. Yeah, I’m kinda surprised by it too. I kept reading the book-past page 20-despite my hatred for errors, due to my respect and admiration for Mallette; otherwise I would have tossed this sucker aside. Eventually, I got caught up in the story. The characters were fine, nothing extraordinary. I did find my attention going from Sassy to Norris, who proved to be the more fascinating character. I would have loved to have seen more of Norris’s family dynamics. Norris’s family had the potential of being a novel by itself. Mallette did not go into enough detail of Norris’s relationship with his stepmother or his father. I would have loved to have seen the inner workings of Norris’s parents’ relationships, which would have brought more depth to the overall story.

Sassy has some wonderful qualities that are overshadowed by the grammar/spelling errors. I loved all of Mallette’s previous novels with varying degrees. I’m going to continue to read Mallette in the future. I hope, no, I PRAY that Mallette employs copy editor on her next outing, because her stories deserve better treatment than the one Sassy received.