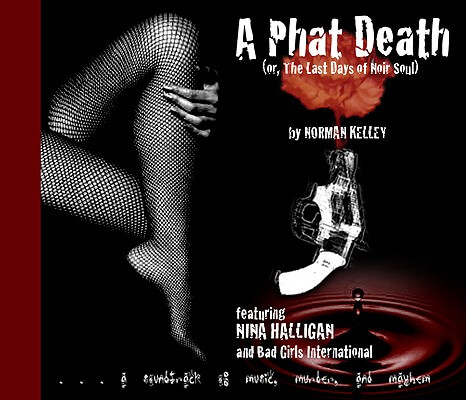 Read a Description of A Phat Death: Or, The Last Days of Noir Soul (Nina Halligan)

After her last harrowing adventure in The Big Mango (an excellent novel by the way), Nina Halligan married musician/journalist Glen Sierra. Nina grew tired of living a life which seemed to constantly consist of death, betrayal, and being the in the perpetual state of loss, rage and loneliness. Nina closed her private investigation business, leaving the violence, and the death of her family in the past. After all, life is for the living. Nina wants the baby, the picket fence, the big hairy lovable dog and everything associated with "a normal life". But, the death of SugarDick, a famous and popular rap artist threatens Nina’s dream. The murder pulls Nina and her husband, Glenn; back into the life that she wants no part of, one Nina can not seem to escape. This time around she has a lot more to lose.

I simply adored A Phat Death. A Phat Death is a completely satisfying and mentally0 stimulating novel. I found it enjoyable, intriguing, absorbing and delectable. A novel loaded with extremely likable characters, plenty of action, a mystery with the right number of twists and turns to make it intriguing, and then has the nerves to contain thought provoking commentary; A Phat Death is one of the best books that I have read this year.

In case you do not know, murder mystery novels are my first love. I am perhaps more critical of novels in this genre than any other because I have read so many of them over the years. I view mystery novels as a competition between the author and me. For example, can I identify the murderer before the author reveals him? When I began A Phat Death, unbeknown to Kelley, he and I became engaged in a battle of wits. When I tried to guess who the mastermind behind the murder was before Nina figured it out, I was brought up short. I was half right because I successfully identified the culprit, but I could not determine the culprit’s motive. This alone is proof of Kelley’s skill crafting a solid mystery. I don’t mean to be bragging, but I am not an easy win. I tip my hat to Kelley on that score.

A Phat Death is not the typical mystery or suspense novel. As with the previous Nina Halligan mysteries, Kelley proves to be an observant and objective social commentator. In Black Heat and The Big Mango, Kelley turned his eye to various aspects of Black American society. With a sharp humor and an unflinchingly bold glare, Kelley placed social issues of the black community under a microscope. In A Phat Death, Kelley examines hip hop, the recording business, and various views that African Americans from different economic, social, and educational backgrounds have concerning hip hop and the younger generations of African-Americans who lives under its influence. I felt as though I was getting an education of sorts. Kelley brought forth facets of the recording industry that I knew nothing about: the inner workings of how the artists get paid, royalty points, and the high finance behind it. Kelley seamlessly incorporates story telling and social commentary finely. I could not tell where one ended and the other began.

Although Kelley’s social commentary is fascinating, he did not lose sight of Nina Halligan. Nina is a wholly complex character and with each novel Kelley unearths more depth and reveals additional sides to her. She has the looks, the intelligence, and the ability to get physical. All of these traits are essential for a hero of a suspense/murder mystery series. I do not see Nina as a fictional character anymore. I see her as a complete person.

I remember after I read the first Nina Halligan novel, Black Heat, and I made the characterization that she reminded me of one of those Foxy Brown-like characters that Pam Grier played in her 1970s movies. I was straight up wrong in giving Nina that label. She is a near perfectly realized character. Kelley constructs his novels with more thought, color and intellect than any of those movies from the 1970s.

As much as I love my heroes being strong, sexy, smart and independent, the literary embodiment of a lone wolf; I have always wondered what would happen if the hero was in a committed domestic relationship. For instance, how would Sam Spade act, in the middle of a case, having to stop what he was doing to pick up Jr. from school? To say the least, I was curious how Nina would act in the same type of domestic situation. Would she still have the same strong personality’s traits or would she allow Glen to lead her? Could Glen let Nina be Nina or would he believe that his manhood was being threaten? Basically, who would wear the pants in the family? Kelley answered these questions and more. I was satisfied with the results.

I do not believe that I have ever commented on the cosmetics of a novel before in a review. I have written so many reviews, it is hard for me to keep track. If I have mentioned this topic before, forgive me because I am about to do it again. I stay away from ugly books. I know it is shallow, but I can not help it. If an author does not want me to read his book, all he has to do is put an ugly cover on it. Happily, this was not the case with A Phat Death. The book has the appearance and format of a music CD holder. The front cover is beautiful and loaded with the symbolism and images of the story. The back cover is equally as rich. It is about time someone decided to put some creativity and presentation to the look of a book.

A Phat Death is nothing short of marvelous. It is a full package. The novel is well-paced, sharp and entertaining. Kelley has to be the best kept secret in literature today. Hopefully, A Phat Death will announce Nina and Kelley to a wider audience.