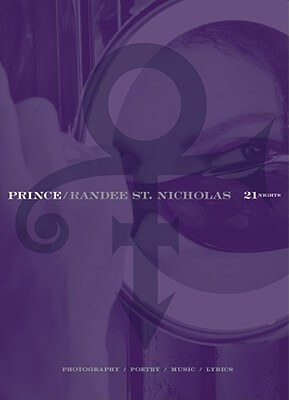 Read a Description of 21 Nights

My number one is Aretha Franklin. Aretha Franklin is my favorite artist of all times. When I was 13 years old, her album, I Never Loved a Man, saved my life, literally. My number two is Ella Fitzgerald. Prince is my number 5. He comes after Ray Charles and Billie Holiday. I am a fan of Prince. When I say fan, I mean fan-by the definition of the word fanatic. His music, his public persona, I am utterly, completely, devotionally captivated by Prince. There was a time in my life, back in my early 20’s; I would have followed him like I was the disciple Peter. When I got word that he was releasing a coffee table photograph book, pre-ordering my copy of the book went without saying. A couple of days ago, I got my book.

21 Nights is a big coffee table book with photographs, by Randee St. Nicholas, that are meant to show what it’s like being Prince for 21 days during his European tour. The pictures are accompanied by poetry and song lyrics written by Prince. Inside the front cover of the book is a CD, Indigo Nights/Live Sessions; which is composed of live recordings of Prince and his band, the NPG. I read the book, played the CD, Indigo Nights/Live Sessions, and happily plunged into Prince’s world’for a little while.

I loved 21 Nights, but then again, I’m a fan. The book is big in size and importance. 21 Nights is the first time that Prince has entered the publishing world and he does it his way. The book is designed to give the reader a look into what the world looks like for Prince when he is on tour. There are photographs of streets, cars, hotel rooms, as he travels from the hotel to the concert, etc. While from an artistic stand point, I understand why these photographs are included. The photographs, albeit beautiful, are tourist pictures; pictures I would have taken with my camera from a car or bus as I played vacationer. ’’that’s the bridge we crossed as I we rode through St. Louis’, or ’’that’s a picture of the hotel we stayed in.’ I felt like the bored, caught-up sucka who is stuck looking at my neighbor’s pictures from her trip to Hawaii or something.

Naturally, there are pictures of Prince. There are pictures of Prince in different poses, with different women (all drop dead gorgeous, yall know Prince), in various outfits. Towards the end of the book a beautiful maid is shown looking through Prince’s things, turning down his bed, etc. The one image that caught my eye throughout these pictures is Prince. Prince does not appear to have aged. Unless he has the best makeup artist in the business, Prince looks like the Prince from the Dirty Mind days. There has to be a picture around of Prince getting ugly, re The Picture of Dorian Gray, because he does not look like a person who just turned 50.

Included, intermittently, in the book are song lyrics and poetry written by Prince. Seeing his writing presented in this manner allowed me to look at Prince’s words from a purely poetic perspective. Prince is deep. There is a strength and depth to his poetry. I did not realize this until I read the first poem in the book, The Unknown. Man, that’s tight. I ended up reading the book twice. The first time, I looked only at the photographs. The second time, I read the poetry. I came away with a new appreciation of Prince.

In my opinion, the most important component of the package was the CD, Indigo Nights/Live Sessions. I have all of Prince’s albums, including foreign imports and bootleg recordings. To show how devoted of a fan I am of Prince’s, years ago when he stated in an interview not to buy the bootleg recordings of him because he did not get paid for them, I stopped buying them! Prince did not disappoint because he eventually released those CDs, the black album and the 5 CD set Crystal Ball comes to mind. If you think I sound infatuated now, you should hear me go on and on about Aretha!

Indigo Nights/Live Sessions clued me into a fact that I have not realized a difference between today’s younger recording artists and the older generation; the ability to sing, perform and record a concert LIVE! When did the live concert recordings go out of style? Back in the day, everybody did at least ONE concert recording. Fortunately Prince is one of the only artists today who can deliver live recordings that make me feel like I’m there. What a show he gave me this time.

On this CD, he covers Led Zeppelin’s Whole Lotta Love, Dorothy Moore’s Misty Blue and Aretha’s Rock Steady. For a number of years, Prince began releasing covers, recording songs originally recorded by another artist, starting with his Emancipation CD package. It is always interesting to hear Prince’s interpretation of other artist’s songs. I was in my own private heaven when I heard Prince’s take of Aretha’s Rock Steady. I always wanted Aretha to record some of Prince’s songs, especially How Come U don't Call Me. If I could play a Misery, I would lock Aretha and Prince in a recording studio and not let them out until I got a double CD of new music from them. Vocalist Beverly Knight handled the lead vocals of Rock Steady and handle it she did. Rock Steady is FUNKY baby. Then with the Rock Steady bass line still thumping, Prince launches into Whole Lotta Love and rocks it!

Speaking of Prince’s vocalist, another vocalist Shelby J. did the lead vocals on Baby Love and Misty Blue. Shelby J. blows, seriously. Man, Prince doesn't deal with itty bitty voice female singers, my girl Rosie Gaines comes rapidly to mind. Prince’s singers SANG. If your church is missing the choir’s lead singer, I would check Prince out first to see if he has her in his band.

Another pleasant happening on the CD is Beggin’ Woman Blues. This medley is tight. A few albums ago, Prince began his exploration of the blues. I’m glad to see that he is continuing his trip. He revisited a couple of the old hits; Girls and Boys, from the Parade album; Delirious and All the Critics Love You in London (New York), from 1999 album. From the opening song, 3121 to the end, All the Critics Love You in London; the CD emerges as one of the best live recording I have heard in YEARS!

21 Nights is a book for Prince’s fans. I doubt it if anyone not interested in Prince as an artist, will give one whit about this book/CD. But there is a Prince in 21 Nights that have not been introduced to the public. 21 Nights serve as a big beautiful calling card.