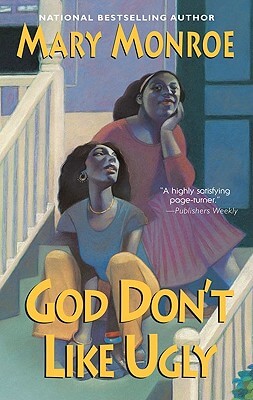 "I was hoping when I started God don't Like Ugly that it wasn't the typical girl-coming-of-age story. Alongside you-go-girl books, girl-coming-of-age books are the most popular books on the literary scene. Being a man, I can't always find much interested in girl-coming-of-age books. Been there, and done that so much I should qualify for an honorary membership to the sorority of sisterhood. Paraphrasing a quote that I read a couple of years ago; it is terrible to say, but the more tragic the childhood, the more interesting the story. God don't Like Ugly, the debut novel by Mary Monroe, tells the story of a childhood so tragic that the book was hard to put down. For a book that sustains a constant current of unease, I laughed, I amen-ed, and I dare say enjoyed myself.

God don't Like Ugly is a story narrated by Annette Goode. Annette was a shy, overweight, dark-skinned young girl who’s seen a lot of life at a very young age and yet she maintained a child naivet’. Having left Florida in the 1950s, Annette and her mother set up housekeeping in Ohio on the advice of a family friend, Scary Mary. In an effort of trying to make the ends meet, Annette’s mother moves in a border, Mr. Boatwright. Mr. Boatwright, in the first year, becomes Annette pseudo-father and parent. In the second year of boarding with Annette and her mother, Boatwright starts sexually abusing the 7 year old Annette. The abuse continues for the next 10 years. After moving to a new house, Annette meets and befriends Rhoda Nelson, the beautiful daughter of the Negro undertaker. Rhoda is strong, smart, take-no-stuff young woman who has a reputation of being "crazy". Rhoda lives in a house where her mother is a hypochondriac; her white grandmother, Granny Goose, is suffering from senility; along her white Uncle Johnny and her brother Jock and her father with the movie star looks. In Rhoda, Annette sees everything she is not and the end of the sexual abuse. God don't Like Ugly follows the relationship of Annette and Rhoda through the turbulent times of the 1960s and 70s. God don't Like Ugly is the typical coming-of-age novels, there are twists and turns that separates this novel from the rest of the field.

Monroe wrote an excellent novel. The story, the character development of Rhoda and Annette, timing, the surprise twists made the novel wonderful. Monroe developed and maintain the sense of tension with Annette’s abuse keeping it parallel with the rest of the story, like a low and steady hum that one feels and hear from electric currents. I was so wrapped up in Annette’s plight that I wanted to scream for her; knock hell out of Mr. Boatwright; slap the taste out of her mother’s mouth; anything, anything to stop the constant violations. I was so angry and felt so helpless. I can only describe it as screaming as loud as I can and no sound is reaching my ears. I tip my hat to Monroe for creating this type of tension. It’s something that I hadn’t experienced since I read Gloria Naylor’s Linden Hills.

Throughout the novel, I felt nostalgic. It provided a look back on the way life in the black community use to be. Here are neighborhoods the way I remember them, the sitting on the porch, the listening to the old folks playing bid whist, the running around to everybody’s house, and the old philosophies. It was like ol’ home week. Monroe had so crafted Annette’s world, that I had a hard time leaving it behind.

Reviews of other books by Mary Monroe

Gonna Lay Down My Burdens