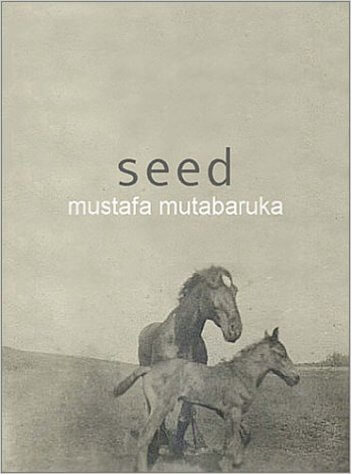 Read a Description of Seed

’"The measure of a man", my father once said, "is in his scars. Without a scar he isn’t even a man. He is, merely, male."’
―from Seed by Mustafa Mutabaruka

I was blown away. I read Seed, Mustafa Mutabaruka’s debut novel, and when finished, I got quiet — the quiet that loudly lives a few scant seconds before an audience awards a performer a thunderous standing ovation. Although some time had passed between reading the last words of Seed and the writing of this review, I fight the impulse to stand and madly applause Mustafa Mutabaruka’s craftsmanship. Seed is an emotionally intense drama that involves a family of three men. I didn’t read Seed — I experienced it. Seed is an engrossing, unforgettable novel that entertained and exercised my mind, and utterly devastated my heart. Seed is, arguably, the best book that I read this year.

The Dove family is three generations of men: Permanus Lucien Dove, the grandfather; Toussaint Marcus Dove, the father; and Ulysses Dove, the son, no middle name. Ulysses, a dancer, has traveled to Africa to perform. He learns upon arriving, that the event, which his dance troupe was to participate in, had been cancelled. Wanting to see more of the Motherland, Ulysses chooses to have a brief, impromptu vacation. His decision to spend time in Africa, will lead him on a disturbing journey through his abusive childhood, his relationships with his father and grandfather, and the dark corners of his mind where his jailed fears, longing, and loneliness are threatening to escape.

Seed is a stunning, incredible masterpiece! I finished it in a complete open-mouth daze. The characters contain the traits such as depth, jagged edges and complexity that all memorable characters I love have. Seed is written in a sure voice, displays great knowledge about human nature, and is mercilessly truthful. The imaginative, risky and demanding structure provides the story with a solid, secure bottom. Because the story was emotionally moving and horrific, I struggled to keep my wits about me in order to appreciate the many dimensions of Seed.

As I read Seed, I was reminded of the literature of Gayl Jones, author of Mosquito, The Healing, Eva’s Man, and Corregidora. Seed has the naked honesty, violence, and the ability to show a certain beauty in pain that I have come to associate with Jones’ novels. Make no mistake, Seed is very much Mutabaruka’s book written in his individual style. Seed is narrated in a strong, crazy, intelligent, definitely masculine, irresistible tone. There were moments when it was rough for me TO read certain portions of the book. No matter how loudly or persistently my inner voice told me to turn away, I couldn’t. I was torn between the desire to flee and insatiable curiosity, not wanting to miss a morsel of it.

The characters are exceptional. The creation of the Dove family is a true work of art. The intricate intimacy Mutabaruka was able to convey between the Dove men is not often shown among male characters in today’s literature. I didn’t realize my hunger for this type of literary scrutiny until I read Seed.

Seed is Ulysses’ story, and the old saying "still waters run deep" must have been coined with him in mind. While outwardly appearing devoid of passion, in reality he is overfilled with it. And like steam in a hot teakettle, pretty soon it has to come out. It wasn’t a question of if Ulysses was going to explode, but when, and what would happen when he did? Mutabaruka’s depiction of Ulysses — as a man who is still bleeding from long ago infected wounds, and is in the process of becoming mentally undone — is nothing short of remarkable.

Toussaint, Ulysses’ intriguing and multifaceted father, captivated me. In an effort to figure him out, I played armchair psychiatrist, resulting in a throbbing headache. After pondering Toussaint, I was left with questions: Is Toussaint; (who in his youth dreamed of being a poet, and of loving Ulysses’ mother, and failed at both), scared to open himself to love anyone, especially his son? In his mind, is Toussaint protecting Ulysses from living with the pain of dreams unrealized by killing Ulysses’ natural inclination to dream? Did Toussaint believe himself a better father to Ulysses than Lucien was to him? Or, was Toussaint’s treatment of Ulysses as simple as the old saying, "You always hurt the one you love"? Toussaint is an expertly crafted three-dimensional puzzlement.

The structure of the novel was innovative and challenging. When I started the novel, I felt as if I was placed inside of a mind thinking chaotic thoughts that zigzagged and bounced off the walls. Fragments of memories and painful episodes flashed before me. There was no sense of rhyme or reason, or who was doing what, or saying what to whom. To say that I was initially confused is putting a Disneyland twist on it. I was thoroughly perplexed. It’s a real wonder I didn’t throw the book across the room. Yet, these snatches of scenes were wholly interesting and mesmerizing. So, I kept reading. I’m glad I did. As the book progressed, Mutabaruka smoothly, ever so smoothly, placed all of those jumbled pieces in their rightful positions and formed cohesiveness in the novel that was as illuminating as newly minted gold. How Mutabaruka pulled it off, I don’t know, but he did.

Aggressive, sharp, smart, poetic, violent, Seed is a remarkable literary achievement. Mustafa Mutabaruka is brilliant, most welcome addition to the literary scene. I’m keeping my eye on him.