Book Review: Somebody’s Knocking at My Door: A Novel 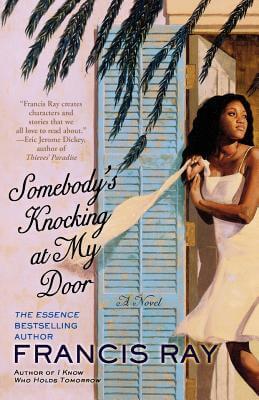 Read a Description of Somebody’s Knocking at My Door: A Novel

I am the first in line when it comes to being bored by, frustrated with, and thoroughly sick of current popular African-American fiction that highlights upscale, designer-clothes-wearing, African-American characters. But I enjoyed Francis Ray’s previous novel, I Know Who Holds Tomorrow, which featured this type of hoity-toity black folk. My enjoyment of Ray’s books continues on with her latest offering, Somebody’s Knocking At My Door, a quick-paced and totally absorbing novel, which I began one Saturday morning and finished that afternoon.

Rafe Crawford is a lonely man, who has an almost paralyzing fear to love and be loved due to his violent, abusive past. Kirsten Wakefield is a determined young woman who wants to succeed in a making a career in the art field, without trading on her social status or family’s money. A tragic event jeopardizes Kirsten’s promising career, but as the old saying goes, "When God closes a door, he opens a window". It turns out that several windows open for Kirsten, including one with Rafe sitting in it. But, before Kirsten and Rafe can begin a relationship, Rafe must address his traumatic childhood, or else he won’t be able to open his heart to love.

The only thing I love more than a good story is someone who knows how to tell a good story. Ray is a flat-out, sho’ nuff storyteller! The novel moved with the speed of somebody who stole something and was making a get-away. The budding romances between Kirsten and Rafe, and Kirsten’s best friend Angelica and Damien, Kirsten’s boss’ son, were captivating. One of Ray’s novels’ best attributes is that her sub-plots are as interesting as her main plot. I wasn’t fond of the happy ending because it was a little too neat for me. But I’m willing to forgive it as it did not detract from my overall enjoyment of the book.

Buppies or not, I liked the characters in the novel. It’s as if Ray had stripped them of all of the pretensions, arrogance and pompousness that I usually associate with the black upper middle class before putting them into the story. Kirsten doesn’t get on my nerves, and Rafe is out and out fascinating. He is wrestling with a roomful of demons and he appears to be losing on all fronts. I was more interested in observing Rafe’s inner emotional battle and not necessarily invested in its specific outcome. I found Rafe’s struggle highly entertaining. I know I sound cold-hearted, but I can’t help it. Ray’s skill as a writer really shines through here because Rafe is not the dominant character in the novel, and he easily could have been. Ray struck a perfect balance of existence between Rafe, Kirsten and the other characters in the book.

There is a little gray cloud in my otherwise clear blue-sky opinion of Somebody’s Knocking At My Door. I’m beginning to see patterns in the two Ray novels I have read, some good, and a few not so good. The good common traits are Ray’s ability to tell her stories without using excessive cuss words or explicit sex. There are occasions, in many novels, when the cussing and explicit sex just aren’t necessary. Ray’s stories are entertaining, full and light because of the absence of these negative qualities.

The gray cloud appears in the predictability of the conclusions of the leading male characters. Toward the end of Ray’s novels, both Rafe (in Somebody’s Knocking At My Door), and Zachary Holman( in I Know Who Holds Tomorrow), confront their respective fathers for the wrong the father committed against him. I wasn’t pleased with this development. But, unlike neatly wrapped happy endings which I can over look it, I dislike predictability.

Overall, Somebody’s Knocking At My Door is a pleasing and satisfying novel. It has a couple of dings that dull a bit of its glowing shine. However, I was completely entertained, and would happily read another novel by Francis Ray.

Read St. Martin’s Griffin’s description of Somebody’s Knocking at My Door: A Novel.