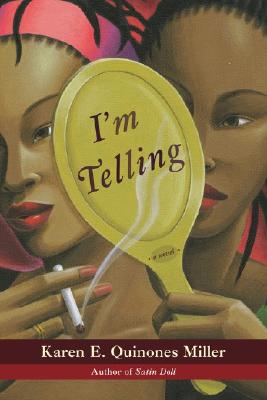 Read a Description of I’m Telling: A Novel

For those who are curious as to whether Karen E. Quinones Miller successfully evades the mythical writers' "sophomore slump" with her latest novel, I'm Telling, the answer is -- (Mr. Drummer man! Can I get a drum roll please? I'm tryin' to work over here!) -- a resounding, concrete " Hell, yeah!"

I'm Telling is a delicious family drama that includes betrayal, jealousy, love and the messy ties that bind families together. This novel is intoxicating. I loved it, and I am proud to proclaim Karen E. Quinones Miller's arrival as a major author.

Faith Freeman is an up and coming literary agent, who appears to have it all. Her relationship with her live in boyfriend is good, and she has a growing professional career and reputation. She's the kind woman who gets applause when she walks in church on Sunday morning. Faith and her identical twin sister, Hope, are bound by love, and by the terrible knowledge of Hope's sexual victimization by their stepfather that began when the twins were 9 years old. While suppressed for many years this horrible past is about to make Faith's world unravel at the seams. The tension, unspoken resentment, pain, and emotional baggage are all stirred into an explosive gumbo that propels this compelling family tale at the speed of sound.

In I'm Telling, Miller zeroes in on the interactions between Faith, Hope and their mother, Miss Irene, and offers a microscopic view of this family's dynamics. I love Miller's narrative style. It is well suited to complex characters and fascinating story lines that are solid enough to withstand this type of severe scrutiny. Fortunately, Miller had the right plot elements, technical skills and talent to pull this intense perspective off in I'm Telling.

The three main characters are strong and wonderfully three-dimensional. Faith is a figurative shock absorber that buffers between Hope and Miss Irene, and represents the "normal" side of this family triangle. Sister Hope, however, is just plain strange. I can't tell whether I liked her or not. I could say that the molestation and her mother lack of protection account for such strangeness. But truthfully, there is no evidence to believe that Hope's elevator ever went to the top.

The character that truly captures my imagination is Miss Irene. In my opinion, Miss Irene is the sickest coin in the collection plate. She makes my ass itch. I would love nothing more than to wrap my hands around her neck and shake her until her head disconnected, rolled into the gutter and lodged in a sewer! (A true testament to Miller's writing prowess!) I want somebody to sit me down and explain to me, (as if I were a 6 year old child), the reason a mother could allow a pervert to molest her child, and then continue to live with him as a loving wife. Despite my animosity towards Miss Irene, I have to say, even if Miller had made her the narrator instead of Faith, I would have STILL inhaled I'm Telling. Miss Irene may be despicable, but she sho' nuff ain't boring.

I'm Telling centers on family relationships in the aftermath of sexual abuse. Not only was the devastating, long-lasting damage of incest well communicated, but Miller also elaborated on the harm that it inflicts on the entire family, and not solely the incest survivor. Miller did not preach, get sanctimonious, or provide salacious and tawdry circumstances in order to "get religion" by the end of the book. The fact that Miller had a family member, other than the abuse survivor, provide the voice of the tale, made the story objective and even more poignant. Telling the story from Faith's point of view is a minor but important creative decision that allowed for a comprehensive view of what this family suffered, and is still suffering.

I didn't like the ending, probably because it was the ending. The novel reached a satisfactory conclusion, but it happened too fast and seemed to have skipped a few steps. This rushed ending was all the more obvious in contrast with the book's precise and detailed view of the family. I was left with a big "What Happened?" question that I couldn't shake. Mainly, I hated to let these people leave so quickly. Anything that could have delayed their eventual departure was to the good.

I adored I'm Telling even more than Miller's debut novel Satin Doll. I'm Telling shows Miller's growth into an excellent author. The writing is tighter, the characters are more intricately detailed, and the story was enthralling and easy to dramatize. I didn't read I'm Telling, so much as I watched the HBO Saturday Night Movie version in my mind's eye.