Book Review: Passing Strange: A Gilded Age Tale Of Love And Deception Across The Color Line 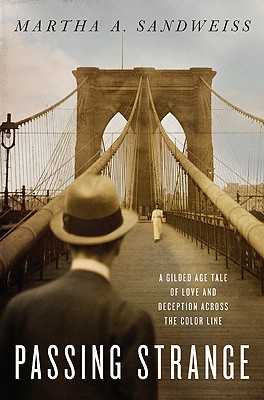 by Martha A. Sandweiss

Read a Description of Passing Strange: A Gilded Age Tale Of Love And Deception Across The Color Line

"We were the only minority family in all of Cypress, California. When my parents moved in, before I was born, they used to have these oranges come through the window all the time.

It was certainly an eye-opening experience, being five years-old. But it was very interesting that I grew up in the 1980s and still had incidents, even in the 1990s at my home... Right before the 1994 U.S. Amateur, I was eighteen, I was out practicing, and some guy yelled over the fence and used the N-word numerous times at me."

’Tiger Woods, in a chapter entitled "Looking Back at the Balcony"

Based on its misleading title and the imposing photo of its author on the cover, I expected Who's Afraid of a Large Black Man to be made up mostly of lots of those impulsive musings Charles Barkley makes regularly on TNT. After all, the retired NBA great has found a home there as a controversial analyst given free rein, it seems, to weigh in with any ridiculous pronouncements which come to mind, many venturing far beyond the realm of basketball.

So, I was not surprised to see that he'd written a book with such an "in your face" title, especially since his editor was Michael Wilbon. For Wilbon is the equally-outrageous co-host with Tony Kornheiser of Pardon the Interruption, a shouting match aired daily on ESPN, covering a range of topics related to sports. What is amazing, however, is that these two media clowns have actually produced an intelligent and compelling inquiry into the issue of race, presented from the perspectives of 13 prominent Americans.

Sir Charles says he came up with the idea for this book just as he and Michael were putting the finishing touches on their previous collaboration, a best-seller called "I May Be Wrong, But I Doubt It." Barkley, who refers to racism as a cancer eating away at the soul of America, was concerned about finding a cure. And feeling that the only way to achieve that goal was by confronting the disease head-on, he looked for celebrities willing to engage in honest conversations about it.

Frankly, I found most of the obviously unguarded tete-a-tetes in Who's Afraid of a Large Black Man fascinating. For instance, there's Tiger Woods' remarks about what it feels like being embraced as Asian by Asians and as black by blacks. He points out that he was raised with elements of both cultures, though he now deems the Asian reverence for elders and education as having been very significant. He offers frequent descriptions of encountering racism on golf courses all around the country on his way up, and why tears then came to his eyes after he won The Masters when the all-black kitchen staff gathered on a balcony overlooking the award ceremony in a silent show of support as he donned the ceremonial green jacket.

Barack Obama speaks about the hurdles he had to overcome growing up as a black kid with a weird name being raised in Thailand by a white mother. Samuel L. Jackson tells about having "the crap beat out of me" by his two aunts for bringing home a little white girl he'd befriended at the age of four, because he lived in a strictly segregated Tennessee. He says he soon learned his place and how to be very deferential to white people.

Who knew Charles Barkley was capable of tapping into stars for such a wealth of worthwhile reflections?

Read Penguin Press’s description of Passing Strange: A Gilded Age Tale Of Love And Deception Across The Color Line.