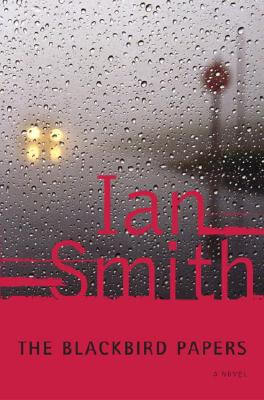 Read a Description of The Blackbird Papers: A Novel

It never fails that every year there is one book in which the book's good publicity reaches me before the book does. This year one of the books is Ian Smith's debut novel, The Blackbird Papers. After reading the novel, I have to agree, The Blackbird Papers is good book. But, and believe me this is a big BUT, by the time I turned the last page, I was not entirely satisfied. The book was too much of a good thing.

Wilson Bledsoe, one of Dartmouth College most popular professor, has a high profile as a Nobel Prize winner. He had just won a $2 million dollar science award. On his way home from a party celebrating his most recent victory, Wilson stops to help a couple with car trouble. He had not been heard from since. In New York City, Wilson's younger brother Sterling Bledsoe gets the dreaded phone call in the middle of the night about his missing brother and rushes to Hanover, New Hampshire to find Wilson. Soon, Wilson's body is discovered. Shifting through false information, racial motives, and hundreds of dead blackbirds; Sterling pursues his brother's killer, making himself a target in the process.

The Blackbird Papers has all of the components necessary for a mystery/suspense novel to be successful: an interesting and appealing detective/lead character; an intriguing mystery; and a captivating voice in which to tell the story. The novel meets the criteria and does it well. If Smith intends to have a mystery/suspense series featuring Sterling Bledsoe, The Blackbird Papers is a nice start, which could have been an incredible one if it was not for undeveloped characters and a few holes in the story.

Sterling Bledsoe is a good, semi-developed character. Sterling is smart, handsome, but he has issues. I'm not knocking Sterling for having flaws. I love an imperfect detective. I also tend to favor detectives who can make things happen. Once he thinks a situation through, Sterling is not afraid to do just that’make things happen. After, reading the 300-plus page book featuring Sterling, I still do not know him. The two points I knew about Sterling at the end of the novel, I knew at the beginning of it: He works for the FBI, and he resents his brother Wilson. This is not enough. Sterling is two dimensions short of being a three dimensional character.

Smith does an adequate job creating his characters, yet he does not fully establish the relationship between them; thereby not wholly forming his characters. For instance, Sterling discovers that Wilson committed a couple of acts that seemed out of character for Wilson and Smith did not elaborate the reasons behind these actions. Second, (I could be giving too much away here) I still do not have a clear picture as to how the murderers formed an alliance in order to kill Wilson. I understood their motives, but not their relationship with each other, or how they came together in the first place.

One of the best elements of the novel is Smith's writing style. The story is narrated by a confident, elegant voice. Smith's attention to detail is on point when creating a scene, tension and dialogue. Smith hits all the right notes. I should not have any complaints, but I do.

My main complaint being Smith would, subtlety at times, changes the point of view of the narrator. The point of view would change from the third person narrative which focused on Sterling to the narrative focusing on conversations and events that Sterling would never be privy or know about. Towards the end of the book--this switch, although gracefully done--started getting on my nerves. While Smith committed no technical writing offense, this narrative did not enhance the story.

The last quarter of the book is a long drawn out a cat chasing mouse scene. The entire section was totally unnecessary, and way too much. The novel ended up being 70 pages too long because of it. As I read this portion of the book, I kept wondering why in the hell did Smith put in a chase scene. I am not saying that the chase was poorly written, because the chase was well written. I am stating that the last 70 pages should have been in another book and not slowing down this one.

Taking into account the points I took away from The Blackbird Papers, it still remains a good book. I like Smith's style. The novel could have been better, tighter. Although I'm not jumping up and down with unfiltered glee or throwing confetti all over the place; I do look forward to reading his next novel.

Read Doubleday’s description of The Blackbird Papers: A Novel.