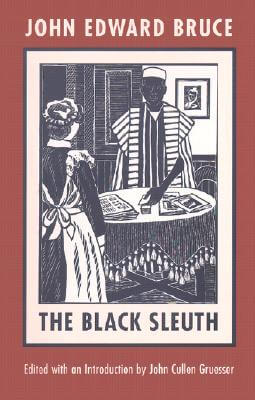 Northeastern University Press, in its latest installment of their excellent Northeastern Library of Black Literature series, features The Black Sleuth by John Edward Bruce, a premier black journalist from the late 1800’s until his death in 1924. The Black Sleuth was originally published in McGirt’s Magazine between 1907 and 1909. Even with its many flaws, and the fact that half of the novel is not concerned with the mystery, or that the mystery never reaches a conclusion, The Black Sleuth is an historical literary treasure, and an interesting read once it gets going.

The Black Sleuth details the journey of a Yoruba, Sadipe Okukenu, from his African homeland to Maine, where he continues his formal education. The book follows Sadipe as he encounters American racism and gains employment as an operative for the International Detective Agency. Sadipe is assigned a case that involves a missing diamond. He must capture the culprits and regain the diamond, while combating ignorance and racial stereotypes. Thus, The Black Sleuth is really less of a detective story than it is a statement on the idiocy of racism, the importance of black pride, and the plain fact that white superiority is without foundation or justification.

It has long been my practice to read the Introductions of books last, for I believe many introductions reveal too much of the story. Maybe, for The Black Sleuth, I should have made an exception. The editor, John Cullen Gruesser, immediately comments in the introduction that the novel is both problematic and unresolved. Gruesser told nothing but the truth. There is no chronological order or logic to the tale. Previously established facts seem to change on a whim. Sadipe’s journey through the American south, where he encounters Jim Crow, is unrealistic and hard to swallow. The fact that the mystery is never resolved is a major irritant. It seems as if halfway through writing about the injustice of racism, it suddenly dawns on Bruce that The Black Sleuth is supposed to be a mystery and he had better get to writing one. This lapse of attention is a shame because when Bruce finally does turn his attention to the construction of the mystery, the result, while incomplete, is pretty good.

Gruesser writes that he would like for The Black Sleuth to serve as an introduction to John Edward Bruce — the man, the journalist, and one of the leading African-American political figures of the late 1800s and early 1900s. The Black Sleuth does a good job in accomplishing this goal. In one of the most fascinating parts of the introduction Gruesser quotes, from a speech Bruce made in 1889 speech entitled ’The Application of Force’, that Bruce — "Not only states that ’Agitation is a good thing; organization is a better thing’ but admonishes blacks that they must be prepared to repay white violence in kind: ’Under the Mosaic dispensation, it was the custom to require ’an eye for an eye and a tooth for a tooth.’ Under a no less Barbarous civilization than that which existed at the period of the world’s history, let the Negro require at the hands of every white murderer in the South or elsewhere a life for a life. If they burn your houses, burn theirs. If the kill your wives and children, kill theirs. Pursue them relentlessly. Meet force with force, everywhere it is offered. If they demand blood, exchange with them until they are satiated. By a vigorous adherence to this course, the shedding of human blood by white men will soon become a thing of the past.’" I guess it’s a good thing that literacy in the African-American community was at a post slavery low, for I suspect Bruce would have sho nuff been swinging from a tree as a result of prescribing this "strong medicine". When black folks were being murdered and tortured at the drop of a hat, Bruce’s writings and speeches show either great courage or blessed foolishness. It’s enough to spark a growing interest in the man.

Though the mystery is unsolved, and no care is given to providing a story that unfolds in an orderly manner, The Black Sleuth, is an intriguing introduction to an African-American political and literary figure whose work deserves greater review and consideration.