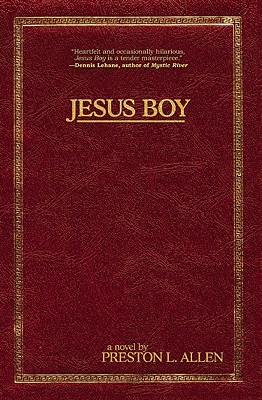 Read a Description of Jesus Boy

I have a question for you:  have you ever heard of anything; a food dish, a recipe, a car or a book, that by the description alone, you knew, KNEW it was going to be good?

I had that feeling when I first heard of the novel Jesus Boy written by Preston L. Allen. While reading the book summary on Amazon.com the bell inside my head started ringing like crazy. I KNEW Jesus Boy was going to be good and it was not. IT WAS 10 TIMES BETTER! The novel which centers on the love life of a 16 year old religious zealot and a recently widowed 42 year old is-mark my words-the best book of 2010! Jesus Boy is off the hook! The novel is not wonderful or marvelous, it is great!

Elwyn Parker is a deeply religious, piano playing 16 year old member of the Church of Our Blessed Redeemer Who Walked Upon the Waters. Ain’t the name of the church a hoot?! I knew I was in for a good time when I first read it. Anyway, from the age of 3, with the solid support of his grandmother Sister Mamie Cooper; Elwyn had the spirit, the faith to serve God. Elwyn would preach sermons in the street; pass pamphlets, anything to spread the Word. He even got his high school to change their mascot from a devil to a gopher. When Elwyn’s major benefactor, Deacon Morrisohn dies, the deacon is survived by his much younger wife, Elaine. In the midst of the grieving process, Elwyn and Elaine begin a clandestine affair. The affair will have long lasting effects on the lovers, their families, and the Church of Our Blessed Redeemer Who Walked Upon the Waters.

Jesus Boy is a literary marvel! When I was reading the novel, I was excited and literally sitting on the edge of my seat. When compared to the great novels of the past century: Invisible Man, Catcher in the Rye, Lolita, Native Son; Jesus Boy sits easily in their company of greatness. The novel is multilayered and humorous in places as it took me through a journey through organized religion, Christians, the relationship between a man and a woman, and human nature in general. There is a scene in which Elwyn’s grandmother, the Faithful Sister Mamie Cooper, makes a confession to Elwyn that is utterly chilling. If this scene is ever filmed, the actors will win Oscars! Through the main plot and its many subplots, Allen fleshes out the characters while maintaining a pleasant flow and an extraordinary narrative style.

The main character Elwyn is a memorable, fascinating character. Most of the novel is comprised of the different characters taking turns performing as narrator. From the start, Elwyn held my attention. Allen was able to capture the voice of a male teenager and make it captivating. I am not a fan of teenage protagonists. I tend to find many of them boring and stupid. With Jesus Boy, I have not been so enamored by a teenager since Holden Caulfield. As if that was not enough, Allen throws Elwyn and Elaine’s relationship into the mix, which kicks the novel to a completely different level. I had the same perverse fascination with Elwyn and Elaine’s relationship that I had with the one in Nabokov’s Lolita. I wanted to turn away, but I didn’t. Eventually, I stopped fighting with myself and happily went with the flow.

Jesus Boy is a novel of greatness. If I had to choose the novels that I would classify as examples of the mythical Great American Novel, I would throw Jesus Boy into the ring of consideration. I had not read or heard of the author Allen before, but this novel places Allen in the company of Percival Everett and Toni Morrison, as a literary genius. I cannot say this any plainer; get Jesus Boy and Read It!