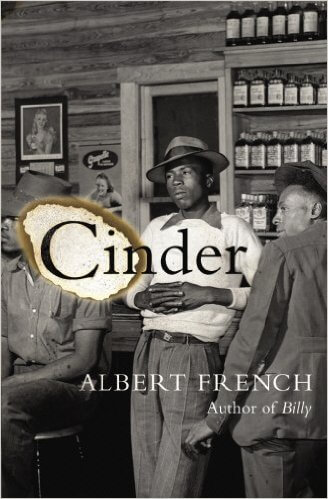 Read a Description of Cinder

Cinder, the latest novel by Albert French, is a sequel to French's 1993 debut novel, Billy. Although it had been a long time since I read Billy, the novel is one of my favorite novels of all time. I was pretty excited to get Cinder for it had been a good number of years since French had published any new works, his last being the 1998 novel I can't Wait on God. My excitement soon turned to dread then frustration. Cinder does not suffer from bad writing; Cinder suffers from a lack of conflict and no identity. Frankly, it hurts to write this review, but it is what it is. I wasn't feeling Cinder AT ALL!

The novel opens with the return the body of 10 year old Billy Lee Turner to Banes, Mississippi, days after he was legally electrocuted for the stabbing death of 15 year old Lori Pesko. Cinder Turner, Billy's mother, and her aunt Katey are waiting in the rain for Billy's final homecoming. The novel proceeds to tell with how the town of Banes, Mississippi lives in the aftermath of Billy's execution from 1938 to 1942.

To put it simply, I disliked Cinder immensely. Cinder is as flat as Kansas state highway and just as lively. The writing and the narrative is fine. French's writing has a fulfilling, laid back, taking-it-easy groove, while being solid at the same time. His writing abilities have not decreased over the years since he published Billy, or Holly, his second novel. I also enjoyed the third person narrative French used in the novel, one which is meant to duplicate a normal person, with a Mississippian accent, telling you a story. No problem there.

However, my biggest problem with Cinder is that it is missing a purpose, a core: the reason for existing. Where is the conflict? Hell, I wish I knew. There has to be a conflict in order for the story to move. The aftermath of Billy's death isn't enough to move the story forward, which is odd considering that the death isn't dwelled on in the novel either, except for Cinder's silent mourning, which got on my nerves. There is nothing interesting enough about the people in the town to move the story. In Cinder , Banes is reacting to everyday life, which is as fascinating as watching a fly pee on a dandelion. If Banes, Mississippi was another Peyton Place, gossipy, low-rent morality; the tone of this review would be entirely different.

It didn't help Cinder's case that before I read it, I read William Faulkner's The Hamlet. The Hamlet is a novel that focuses on a small Mississippi town called Frenchman's Bend, the hamlet referred to in the title and how the townsfolk of Frenchman's Bend reacted to--directly or indirectly--to one outsider, Flem Snopes. With the appearance of Flem Snopes, the town of Frenchman's Bend changed; therefore, providing the conflict; thus, producing the movement to the story. I did not see the one thing that affected the town of Banes out of the ordinary; or even how one thing caused a ripple of effect to a portion or one person in the town. As it is now, the story just sits there; unmoving, aggravating and unapologetic.

Another point of frustration I have with the novel is French did not recap the Billy storyline at the beginning of Cinder . I was irked right off the bat. It had been a good number of years since I read Billy, approximately 10 years or more. Honestly, I forgot who Cinder was. The Cinder book cover did not help refresh my memory. Using The Hamlet again, the story of the Flem Snopes's father, Abe, began with a Faulkner short story titled Barn Burning. At the beginning of Hamlet, Faulkner supplied a recap for the unfamiliar reader to know the history of Flem Snopes. French did not perform such service for Cinder. You are hearing it here first, if you had not read Billy, or do not remember it well, you will need to read Billy before beginning Cinder .

And then, to top it off, as if my frustration with the novel did not cause my teeth to itch enough; as my reading of the book neared its end--approximately 20 pages from the back cover--the story had the nerve to pick up! Yeah, the last 20 or so pages of the novel, the pace and story picked up and moved like somebody had set its drawers on fire, only to come to an abrupt stop! See, this is why I don't go to church, for if I attended church on the regular, this book would have caused me to lose my religion along with everybody else that sat in the same pew as me. French, or his editor, should have started the novel with the last 20 pages first and proceeded with the book from that point on. I was totally out done.

If you had read this review this far, you already know that I can not recommend this book.