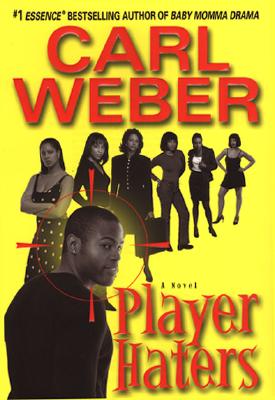 Read a Description of Player Haters

No one writes drama like Carl Weber. I don’t know how he does it. He keeps throwing out books that I swallow whole with no salt or pepper while having a crooked smile on my face. Weber keeps the party going with his latest novel Player Haters, a novel of siblings finding, keeping, and losing in the game of love. It is Carl Weber’s best novel to date. I enjoyed the hell out of Player Haters.

Brothers Wil and Trent, and sister Melanie Duncan are having a time with their affairs of the heart. Wil Duncan and his wife Diane first appeared in Weber’s novel Married Men. The Duncans have yet to fully put their marriage on the same plateau as it was on at the beginning of Married Men. In this outing, Wil and Diane are attempting to rebuild the trust that was destroyed in Married Men. Wil has a new secretary who wants to do more for Wil than answer his office phone and type a few letters. Wil’s marriage goes through another obstacle course of hurt and distrust.

Trent Duncan is the middle sibling and a playa of the highest order. For Trent, sex is both a pleasure and an occupational hazard. Things haven’t been going well for Trent lately. His life has become a country song; he’s about to lose his apartment, his car, and the love of his life. If Trent had a dog, it would have bit him and then ran away. Trent loves his lifestyle, but even a playa can get played. Melanie Duncan, the little sister, may have found the perfect man, her soul mate. Soon Melanie will have to make a choice that could leave her devastated no matter her final decision.

Player Haters has all of the characteristics that I have come to expect in a Carl Weber novel: interesting characters, a story that moves with a break neck pace and generating the guilty pleasure I get from witnessing highly volatile, deeply emotional confrontations that I usually find on Jerry Springer and Maury daytime talk shows. I am a faithful viewer of these TV programs. Do not get me started on the sheer enjoyment I get watching The Maury Show when the show’s subject is paternity tests! *LOL* I get the same type of delight from Carl Weber’s novels.

Weber does his usual good job creating fascinating characters. Wil remains an appealing character. He was already a well developed character. He is more so now. Trent and Melanie are fine characters as well. Weber balanced the three siblings in the story where no one outshined the others.

As much as I loved the book, I had a few issues with it. One of them being I did not sense a family bond between the Duncans. There were moments I forgot they were related. I was reminded of the family ties when Melanie or Trent was mentioned babysitting Wil’s children; or Trent ran into Melanie at a club, or Melanie and a short phone call with Trent. It would have been nice if Weber elaborated on past episodes that would have illustrated the dynamics of the siblings’ relationships with each other’be it loving, hostile, or otherwise. The novel could have revolved around three friends instead and produced the same effects.

If I’m not mistaken, Player Haters is the first novel that Weber featured the same lead character from one of his previous novels. I can only hope that Weber does not fall into the non-creative pit of using previously featured characters in his future novels. So many authors do it with dismal results, ultimately producing a pile of junk with characters I have long grown tired of seeing.

Weber is one of my favorite authors. Every year I look forward to his and Eric Jerome Dickey’s latest novels like Christmas. Weber’s writing style is becoming more definitive and appealing. I only wish that Weber would be more adventurous and imaginative with the structure of his novels. All of his novels have the same format with the narration of each chapter being handled by a different lead character. It’s time for a little creative growth.

I loved Player Haters. It is truly a Calgon-take-me-away book. The drama is intense, funny, absorbing and highly entertaining. The story moves like a house afire. I read the book in one sitting. I could not put it down.