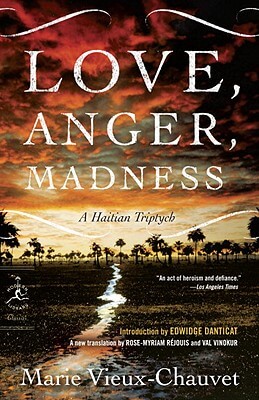 For those of you who don't know me or have not read any of my reviews, I have a tendency of getting extremely excited over republished books written by African American authors that have been out of print for a time. The Modern Library recently published for the first time in English, the late Haitian author Marie Vieux-Chauvet's novella trilogy, Love, Anger, Madness. The three novellas are about Haiti when it was under military control during the mid-twentieth century. Vieux-Chauvet examines the country's social and political structures under military oppression, giving voice to the injustice and tragedies that the Haitian people endured. While reading the collection; I was stunned and swept away by the image of Haiti from Vieux-Chauvet's observant, honest, and uncompromising view of the Haitian people and human nature. My eyes were open to a country and a people that I had never seen before and the stories of their lives told in a compassionate, strong, yet gorgeous poetic voice. Love, Anger, Madness is a newly discovered classic that is waiting to claim its right place in literary greatness.

The first novella in the trilogy is Love. Love is the journal entries of Claire Clamont, who serves as the central character and narrator. Through her journal, Claire has constructed her own little world where Claire can be all of the things she is not in reality. She is the oldest of the Clamont sisters, which includes: Felicia, the middle sister; and Annette, the youngest. The Clamonts is a wealthy mulatto family, the epitome of Haiti's upper crust society. Claire is the darkest member of the family. She has a honey colored complexion and is considered "black" by her family and their social circle. Growing up in the color struck family left Claire emotionally traumatized and mentally unbalanced. As Claire reveals her longing, self-hatred, loneliness, unstableness and her love for Felicia's white French husband Jean Luze; Claire's inner secret world unravel when the reality of being militarily occupied by the "Blackshirts" cannot be ignored any longer.

Vieux-Chauvet was a phenomenal writer! It's not often that I am able to get into an author's groove and flow with it. Her insight, the rhythm and pacing of the story was melodic, easy moving and harsh. Vieux-Chauvet does not back away or sugar coat any of the traumas or tragedies the people endured. Early in the story, it becomes apparent that Claire is mentally coming undone. Vieux-Chauvet's portrait of Claire was stunning and fascinating—"watching a car accident slowly happening" fascinating. Claire's angst was palpable. There were moments when Claire's emotions and pain were so raw; it was hard for me to read.

The novella also revealed a Haiti and its culture that I did not know. For instance, I was not aware that Haiti was once a French colony or that the United States had once invaded and occupied it. Not only was I ignorant of these facts, but I have never been intellectually curious about Haiti. I have always associated Haiti with voodoo or hoodoo. Because I was not interested in those subjects, Haiti was way under my radar. Love, as well as the other novellas in this collection, opened my eyes.

In the novella, Anger: One morning the Normil family discovered that their land had been taken over by the "Blackshirts". The family becomes angry at the invading force and each other. The Normil family decides to fight back, but not together as a family. Their individual plans of retaliations will lead to the family's destruction.

Vieux-Chauvet used an interesting narrative technique in relaying the Normil's story: The novella begins with the family identified only by their title; the grandfather, the son, the wife, the invalid. As the story unfolds and the characters thoughts and pasts are revealed, only then are their names spoken. The characters, literally, transform from shadowy, misty figures to sharp, finely detailed human beings. It was disturbingly wonderful. By the time I reached the middle of the story, I did not want these characters to rub up against me, which is exactly what they all ended up doing.

Vieux-Chauvet continued with the intense, unblinking probe of a portion of Haitian society when she used the Normil family to examine Haiti's middle class under the occupation. The author provided a surprisingly unique perspective. I don't mean surprising in that it could not or have not happen, but that I had never thought of how any military occupation affects the entire social structure of a country or community.

The last novella in the collection is Madness, which features a young mulatto poet, Rene, who sees devils peeking around the corner of buildings or under bushes, and also has a plan to attack the "Blackshirts". Rene is mad, crazy as all hell. He barricaded himself in his dead mother's shack. When his three friends, Andre, Jacques, and Paul come to visit, they become involved in Rene's mentally disturbed world with disastrous results.

Vieux-Chauvet shows her ass with Madness. When I began reading this novella, the high I had from finishing Anger fell into the toilet faster than the speed of light when I started Madness. I HATE reading stories about crazy people, especially when those stories use a first person narrative with the crazy person as the narrator. It SUCKS! I don't believe that any author can make heads or tails of what goes on inside of a crazy person's head…because they're crazy. If the insane person could make sense or have an iota of logic in their thought process, he wouldn't be insane! As a reader, I don't know if what is going on in the story is true or false. Is the happening, event actually happening or not; or, is this episode a dream; or, is the event being told through a distortion of the truth, and if it is a distortion, in what way is it distorted? See, that is enough to make my head hurt.

At the beginning of Madness this is where I found myself. If I had not read most of the collection by this point, I would have laid it down and moved on to the next book. Instead, I put on my big boy draws, hunkered down and continued reading. I'm glad I did. Vieux-Chauvet illustrated how insanity can easily move from one person to another. Read the story and see how the author accomplished this move. I have to give Vieux-Chauvet her props, I was more than impressed.

As the story progressed and the vision of what was going on in the poor neighborhood came sharper into focus, the story developed into a work nothing short of brilliant. The result is equally as devastating as the occupation had on the upper and middle class. After I finished the story; thereby, the book; I could not help but be moved, emotionally and intellectually by what I had read.

With Love, Anger, Madness, Vieux-Chauvet accomplished a mission that many authors have tried and failed: blending a political message within a story while neither the story or the message suffering from the mixing. Vieux-Chauvet wrote passages about the landscape of Haiti with such love and beauty that it was heartrending reading it. With the same voice, Vieux-Chauvet showed the dehumanization and demoralization that military occupation had on a society, culture and its people. In lieu of preaching to me or at me, Vieux-Chauvet used the novellas to drive the point home, and it's dead on target. I became enraged by the injustice of it all, which I suppose was the desired effect.

Love, Anger, Madness is an extraordinary work of literature that is waiting on its "classic" determination. The trilogy covers the three major social structure of the Haitian culture: the upper class in Love, the middle class in Anger, and the poor in Madness and how military occupation affects all of its citizens. Love, Anger, Madness is an excellent book. I highly recommend it.