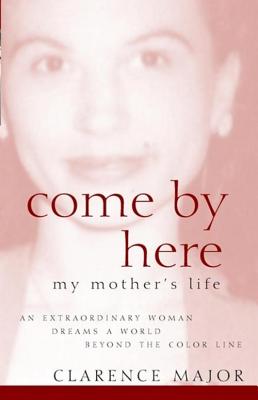 Read a Description of Come By Here: My Mother’s Life

I found a pearl when I happened upon the remarkable author Clarence Major. I discovered Clarence Major by way of an anthology, titled After Hours edited by Robert Fleming. Although, I had heard of Clarence Major, I had never read any of his works until I promised to review After Hours. In the anthology was Anita, an excerpt from Major's novel All Night Visitor. While reading Anita, I immediately flipped for Major and vowed to read all of his books. Fortunately, before the afterglow of my sudden admiration ebbed, I remembered that his latest book, Come By Here: My Mother's Life was in my "to read" pile. What a stroke of luck! Not only was I in the opportune position of following up on my brand new high regard of Clarence Major but I did it with an incredibly awesome book! Come By Here is a book that transcends labels. It could claim to be a biography, as well as a novel. Regardless of classification, Come By Here insists on being what it is -- a book of quiet beauty and simple elegance, whose heart is as warm as a hug from an old friend.

Come By Here begins and ends with Mrs. Inez Hull relating her life story to her son, Clarence Major. Highlights include information on her childhood, her family, her marriage to Clarence Major, Sr., her life in Chicago, intra-racism due to her light skin color and capacity to pass for white, and being a single mother. Miss Inez' life is full of triumphs and tragedies, tears and laughter, and poverty and riches. She had the courage to face the unknowns of new days when the heartaches of yesterdays lays heavy on her soul.

While Come By Here is Miss Inez' story, she shares center stage with Major's extraordinary writing style and deep insight into Inez' nature and character. The exquisiteness of the book is that Major made the writing of the book appear authorless, as if Come By Here wasn't written in the conventional sense by a writer committing a story to paper. No. Come By Here captures the intimacy of Miss Inez talking to her son, as I blatantly eavesdropped on their conversation. Major seamlessly threaded real emotions into the story, giving Miss Inez's narrative the calming, hypnotic power of a gently flowing river.

Come By Here takes the meaning of the old Native-American saying, walking a mile in the other person's moccasins to a new level. Upon completion of Come By Here, I pondered a few of questions I wish I could ask Major: How strange was the notion of stepping into his mother's life, thoughts and memories? Did it cast any light of understanding where none existed? How difficult was it to keep his own emotions, slights and hurts from coloring Inez' characterization? These experiences in bringing this book to life may not be mind twister puzzles, but I believe they would become heart-wrenching exercises in developing maturity and compassion.

Come by Here is a marvel! In a very real sense, Major didn't write the story of his mother, but of all our mothers. They may not have built skyscrapers, fought crusades or lead great social movements. However, we -- their children -- bear witness and acknowledge their humanity. Without sappy, melodramatic sentiment, and a computer's objectivity, Major wrote a magnificent book that shared his mother with the rest of the world. And for this, I thank him.

Post script: I grew to have a great affection for Miss Inez. On the last page of the book, there's a photo of Miss Inez and the author. I felt myself beaming as I looked at the picture and said, "Why, Miss Inez, it's a real pleasure to finally meet you. I've heard so much about you." * Smile*

Read Wiley’s description of Come By Here: My Mother’s Life.