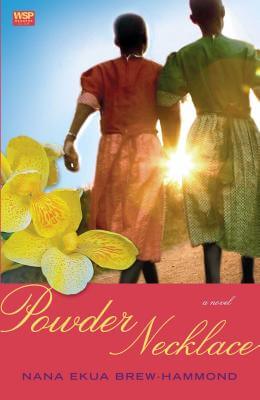 I was trying not to like Powder Necklace, the debut novel by Nana Ekua Brew-Hammond. I had had my fill of the black girl coming-of-age story. A few years ago, these types of books were one of the few constantly thrown in my direction. While I can appreciate it on a certain level of humanity, it started to get on my nerves because how many times can I hear the same ole blues without losing my mind: wondering when a flat chest is finally going to start growing breasts; or the experience, and accompanying embarrassment, of getting the first period, and where the womanly deed happened, and who was there, and what color underwear the girl character was wearing when she got it. I am a man, damn it! I don’t have periods. I never had a period, nor had I ever wished to. Frankly, I don’t give three shakes of a rat’s ass about ‘em. It was time for ol’ Thump to make his move and leave the girl coming of age books alone. Years later, Powder Necklace crossed my desk and I stepped out on faith and gave it a chance. Sure enough, I was subjected to the ever present the "got my first period" episode; *rolling my eyes* but, the novel is wonderful! I wasn’t meaning to, but I came to love Powder Necklace.

Lila Adjei is 14 years old and lives in London, England with her mother Felicia Adjei. Lila doesn’t have a relationship with her father Jude Adjei. Their relationship was reduced to only the few phone calls Lila is able to secretly have when she visit her aunt. To Lila, her father is a loud booming voice on the other end of a phone call coming from New York. After Felicia walks in on Lila playing a video game with a male school mate, she ships Lila to her native country of Ghana to go to an all girl school. At the school, not only does Lila contend with culture shock, she also deals with the issues she has with her mother for sending her away. When Lila had settled into her new life; Felicia sends for her to come back home. Upon arriving, Lila is introduced to the new man in Felicia’s life. As she is adjusting from the last major upheaval, Lila is caught in a situation and Felicia ships her off to New York to live with her father, Jude. Now Lila has to deal with a father she doesn’t know, his new wife and their twins. When Lila gets off the plane, the family is on the move to Disney World. While Lila travels more miles than 14 years old should, during her year of world travel, she has to hit puberty, deal with issues of abandonment with her parents and discovered Lila and where Lila fits in the world.

Powder Necklace fooled me. I was not prepared for the journey Lila was about to embark. The story flowed like warm golden honey in the summer. The character Lila turned out to be one hell of a character. Baby girl went through some changes. The one thing I loved about Lila was that she was real. Lila was confused, angry, resentful, rebellious, longing and hungering for what all children need-the security of two loving parents. Bree-Hammond didn’t make Lila wise beyond her years or an overly simple minded teenager in order to make the story flow or as a literary gimmick. Lila is universal and recognizable.

Powder Necklace is absorbing and intoxicating. By the time I was one quarter into the novel, Lila not only had my sympathies, I was beginning to root for her. Bree-Hammond has a wonderful graceful, uncomplicated style. The story flowed fast and smooth. Powder Necklace is a charming introduction to an impressive talent.