Book Review: A House Is Not a Home: A B-Boy Blues Novel 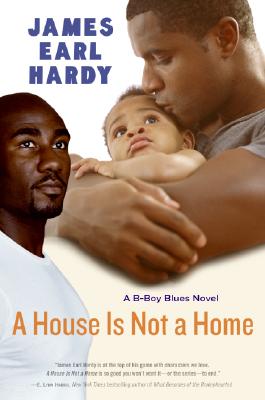 Read a Description of A House Is Not a Home: A B-Boy Blues Novel

The song says it's hard to say goodbye’humph, not when the guests have overstayed their welcome it Ain't. At that time, saying goodbye is the easiest thing in the world to do. A House Is Not a Home is the final novel of James Earl Hardy's B-Boy Blues series. While E. Lynn Harris is credited, deservedly so, with making novels about the lives of gay African American characters popular and profitable; it has always been my contention that Hardy's B-Boy Blues series was the more interesting and entertaining literary series. The last few installments of the B-Boy Blues series have been less than stellar. While it is true that all good things must come to an end, the adventures in love of Pookie and Lil’ Bit should have ended sooner rather than later.

Through five novels Hardy has taken me through the ups and downs of the relationship between his two main characters: Mitchell Crawford (Lil’ Bit) and Raheim River (Pookie). Hardy wraps up these two characters relationship in A House Is Not a Home. Mitchell is a stay-at-home father raising his daughter and Raheim's son. He is trying to live a life that does not have Raheim in it. The operative word here is trying. Mitchell isn't doing a good job at it. One day, out of the clear blue, Mitchell's dreams are on the brink of coming true, all except one.

Raheim is picking up the pieces of his shattered world. All of the things that he took for granted; family, career, love, has slipped from his grasp. Starting from below zero, Raheim begins rebuilding his life. The lead role in a feature film could be a sign that he is getting a second chance to at the life he foolishly threw away. Will Mitchell and Raheim find their way back to each other, or is it time for them to say good bye to each other as we say good bye to them.

A House Is Not a Home is an adequate, mildly entertaining read. The main characters come into this novel already developed. All of the positive qualities that I have already said concerning Hardy's previous novels, in past reviews, still hold true here in the latest installment. Yet, despite a few new events and happenings in this novel, I could not help but to feel that I am ready to leave a stale party, but I rode with a person that isn't quite ready to go.

The novel reads like a literary equivalent of a greatest hits CD package, all of the hits that I already know and love are together in one collection, sprinkled with a few new songs. Hardy hit all of the high and low points of Mitchell and Raheim's relationship, from the beginning to today. Hardy presented new episodes for the characters to live through, but they only served as opportunities for the characters to reminisce about their love affair. I could have done without the recaps. Instead of feeling all mushy and sentimental, I was counting the tiles on the floor and begging to be put out of my misery.

However, all is not lost; there was an element of the novel that succeeds on one level. Hardy allowed the characters to mature. Mitchell and Raheim are not the same two people I met years ago in B-Boy Blues. There's been a good deal of water that flowed under that bridge and it shows in the characters fibers. Mitchell and Raheim are wearing their years. I do not know too many authors who could have pulled off this same feat, many have tried and failed. Hardy is to be commended.

A House Is Not a Home would have been a more enjoyable book if I had not read the other five books in this series. The novel is perfect for someone who doesn't know the history of Mitchell and Raheim, and then their memories could serve to whet their appetite to know more about the characters. To me, they were on the stage way too long. When I was younger and singing in the Angelic Choir at the First Freewill Baptist Church years and years ago, our pianist, Mrs. Eva Mae Jefferson, use to say, ’Leave ’em wantin’ more. When the spirit has hit, and hit hard, get off the stage while the church is wantin’ more.’ Hardy should have listened. I don't want to end this review on such a negative note, for there is good news. Now I finally get to see Hardy spread his wings as an author, create new worlds, other lives, other loves. I am, anxiously, looking forward to that.

Read Amistad’s description of A House Is Not a Home: A B-Boy Blues Novel.