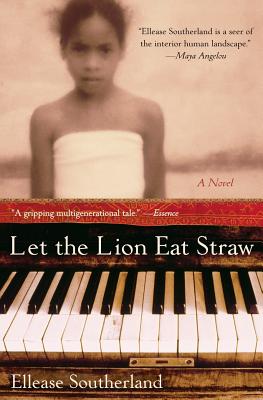 Read a Description of Let The Lion Eat Straw

One of the residuals affect I had hoped would happen when African American literature was proven marketable was the rediscovery of previously published novels that did not gain a large audience during their initial publications.  I am so happy that the novel Let the Lion Eat Straw by Ellease Southerland was one of the chosen few.  Written in a stark, poignant style that recognizes the power of space and imagery; Let the Lion Eat Straw is the story of the life of a woman who suffers through life's trials.  I was immediately drawn into the story and literally could not put it down until the last page was turned.  Let the Lion Eat Straw is remarkable!

Abeba Williams spent the first years of her life living in the Carolinas with an old midwife, Mama Habblesham.  Although Abeba's life was lived in poverty, she had a happy life.  She and Mama Habblesham were extremely close.  Abeba knew she was loved.  When Abeba was almost six years old, her biological mother Angela comes back down South to take Abeba to live with her and her new husband.  Abeba's life will soon take many different turns, some good, others, painfully.  She discovers her gift of music and wins a partial scholarship to Juilliard, until she meets Daniel Torch in church one Sunday morning and he sang.  Now Abeba once promising musical career is thrown to hell.

I love Let the Lion Eat Straw.  I was not expecting to.  I started the novel and initially thought, oh no not another of black girl coming of age novel.  Not that I'm chauvinistic or anything but I get tired of the black girl coming of age books.  It seems to be the only kind I run into.  Maybe I would not feel this way if I was once a black girl.  In my opinion there needs to be more black boy coming of age novels.  I almost put the novel down and pick up another one.  I am glad I did not.  The novel is off da hook.  I fell into the story head first, hard.

The narrative is sharp, naked and moving.  I'm doing all I can not to jump up and down, shouting Hallelujah, because Southerland is an author who knows how to use space in her writing style.  I was not bombarded with words on top of words describing scenery or what a character is doing this second of that hour of this day, this type of writing style suffocates the story (in many cases attempts to disguise that there is no story) and my imagination.  Southerland use of pauses allowed me to fully use my imagination, allowing me-the reader-to claim partial ownership of Abeba's story.

The characters are fantastic.  Southerland took her time to show Abeba's quiet steely strength.  Angela is a horse of another color.  It is with Angela that Southerland skills as a writer shone brightest.  Angela is a big mass of complexity and contradiction.  Angela resents Abeba and I'm not sure if she ever truly loved her as a mother loves her child.  The words to the R&B great Mable John classic, Taking another Man's Place, comes to mind to sum up Angela's attitude toward Abeba, ’You don't want me.  You don't want nobody else to want me.  What kind of thing do you think you're going to send me through?’  Angela, as a character, is fascinating, powerful and frightening.  I wanted to smack hell out of her, but I always looked forward to seeing her.  Angela kept the story grounded.

Let the Lion Eat Straw is a timeless classic that was not recognized by the book buying audience as classical during its initial publication in 1979.  Time is on its side for 30 years later, I am hailing it as the classic it is.