Book Review: Black Like Us: A Century of Lesbian, Gay, and Bisexual African American Fiction 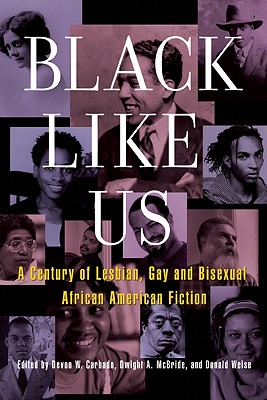 Read a Description of Black Like Us: A Century of Lesbian, Gay, and Bisexual African American Fiction

Black Like Us: A Century of Lesbian, Gay and Bisexual African American Fiction, the latest anthology of gay/lesbian AA literature, is, in a word, splendid. Showcased between its covers is some of the best literature written in the past century, including excerpts from well-known, well-read classics such as E. Lynn Harris's Invisible Life and Langston Hughes's Blessed Assurance, and also excerpts from novels and short stories. Some stories are from books that are no longer in print, e.g. Countee Cullen's only novel One Way To Heaven, and others are by many authors who flew under my radar, but who, nonetheless, flew magnificently. Black Like Us is an anthology that is beyond important’it is essential.

Black Like Us emerged as the type of anthology I was NOT expecting. When I heard of Black Like Us, I just knew I was in for the latest round of sexually explicit storied anthologies that has become our latest AA literary flavor-of-the-month. I couldn't have been more wrong. Not that I have any objections to anthologies of eriotica such as Brown Sugar or Black Silk. On the contrary, these anthologies are valiantly fighting the many stereotypes of sex that remain stubbornly, annoyingly, linked with the pigmentation of our skin, the fullness of our lips, or the roundness of our asses. These collections are celebrating the reality that we are not primitive or exclusively animal magnetic in the nature of sexuality, but that intelligence and emotions also come into play. Black Like Us gloriously exhibits homosexuality as one contributing aspect to AA literature, either by literary works themselves, or the gay/lesbian authors. The anthology took me from the turn of the 20th century when homosexuality was cleverly disguised in literature/fiction, to its unashamedly reaching the highest plateau of bestseller-dom with today's I'm-here-this-is-me-get-over-it fiction.

The stories included in Black Like Us are extraordinary. There were a number of excerpts and short stories that I had read before, such as Samuel R. Delany's Aye, and Gomorrah, Wallace Thurman's Infants of The Spring, and James Baldwin's Another Country. I eagerly anticipated reading stories by authors that were foreign to me. Black Like Us did not disappoint. I adored the excerpts from Audre Lorde's Zami: A New Spelling of My Name, Jewelle Gomez's The Gilda Stories, Michelle Cliff's Ecce Homo as well as Rosa Guy's Ruby. Amazing. I was totally blown away by Richard Bruce Nugent's Smoke, Lilies, and Jade, a tale of a young male artist who's in love with a woman and a man, who the artist refers to as Beauty. I was so taken with Nugent's story that I have now committed myself to reading a recently published biography of the author. All said I couldn't have put together a tighter, more comprehensive, or more irresistible collection if I was so inclined.

Framing these short stories are essays that finely recreate the era when these works were produced, thus showing the overall obstacles gay/lesbian AA writers encountered creating their art without stifling their true selves. I enjoyed the introductions as much as I did the featured literature. Black Like Us isn't stiff, nor does it contain the same degree of stuffy pompousness that I usually associate with anthologies that appeal only to the academia set. It is not a gathering of stories that normally lies between the covers of Hustler or Penthouse magazine. Black Like Us is an anthology that solidly states without pretensions, smoke screens, or arrogances the rightful place of gay/lesbian AA authors in our society and our literary canon.

Read Cleis Press’s description of Black Like Us: A Century of Lesbian, Gay, and Bisexual African American Fiction.