Book Review: The Interesting Narrative Of The Life Of Olaudah Equiano: Written By Himself 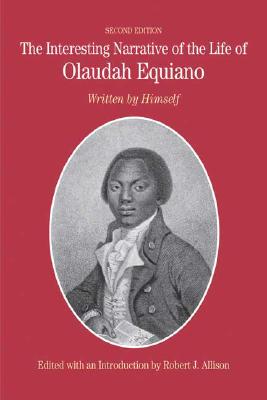 Read a Description of The Interesting Narrative Of The Life Of Olaudah Equiano: Written By Himself

In a continuing effort to broaden my horizon and go outside of my comfort zone, I decided to read The Life of Olaudah Equiano by Olaudah Equiano, even though I had no idea who Olaudah Equiano was. I figured that Equiano must hold some historical significance since his autobiography is still being published over a century after its initial publication [Originally published in 1789].  In the Life of Olaudah Equiano, the author tells his life story, from his childhood days in his native Nigerian village to his kidnapping and being made a slave; to buying his freedom; to his work as a sailor and explorer; and how he found religion. Although there are some points of contention that I have with the author, I can see how this narrative, a couple of centuries old, is still readable and captivating.

Olaudah Equiano was 11 years old when he and his younger sister were taken from their home and sold into slavery. He was soon separated from his sister and became one of the millions of slaves forced to take part in the Middle Passage. Equiano will be renamed Gustavas Vassa, sold several times before being able to buy his own freedom. Equiano leads an adventurous life as a sailor, slave trader, and a member of an exploration team of the North Pole. Along the way, Equiano was introduced to and follows the tenants of Christianity. During the latter part of his life, Equiano turn into an outspoken abolitionist. After much prodding, Equiano writes the story of his life to expose the dehumanization, brutality, and cruelty of slavery and use it as a device in spreading the abolitionist agenda in Great Britain.

The Life of Olaudah Equiano is a marvelous book. I am not going to lie to you; I had a time getting into the book. The writing style is that of the 1700s. It’s not a style that I get along with very well. I find that type of narrative stiff and unyielding, which explains why I have never been able to get through one Charles Dickens book or finish Gulliver’s Travels by Jonathan Swift. I was determined to get through this book, so I buckled down, concentrated and got my work done. About 20 pages into the book, I found that I was really into it.  Equiano has a captivating voice that slowly drew me in. Equiano lead a fascinating life. Often times the autobiography was as if I was reading a story in the same vein as Robert Louis Stevenson’s Treasure Island or Mark Twain’s The Adventures of Huckleberry Finn, because Equiano’s life literally moves from one adventure to another.

As taken as I was with the book, I do have a couple of questions about the autobiography: Equiano’s motivation in becoming a slave trader; and his origin. I wondered did anyone, after reading the autobiography, ask Equiano since he did not like being a slave himself, how could he become a slave trader and an overseer of slaves? Equiano’s justification for his actions as a trader/overseer is weak, at best. I question if Equiano childhood atmosphere had anything to do with how he felt about slaves since his family owned slaves. The hypocrisy of Equiano’s actions is the size of an elephant dressed in a pink ballet tutu sitting in the room.

Equiano’s early life left me questioning the validity of that portion of his story. For instance, Equiano did not discuss how he acquired the name "Olaudah Equiano", especially the last name. I know that it is awfully uncommon for many African tribes to have last names. Equiano does not go into detail when he changed his name back from Gustavas Vassa to Olaudah Equiano. Equiano does not reveal the name of his tribe or people, which I found strange as well. If Equiano never forgot his name, which is totally understandable since he did not become a slave until he was 11 years old; how could he forget the name of his people, yet he remembers a few of their customs and traditions. I don’t know it seems like there something rotten in the cotton. *eyebrow raised*

The one thing Equiano does spend a lot of time and space discussing is his conversion to Christianity. This section of the book bore the hell out of me. I don’t respond well to anyone preaching to me via the written word. Equiano is no exception. I found it strange that Equiano goes into more detail on how he found Jesus than he did on how he could stomach profiting off the slave trade. In my opinion, that tub doesn’t sit on its four feet like it should.

All in all, The Life of Olaudah Equiano is a marvelously gripping narrative. I would not give it the same prominence as the Narrative of the Life of Frederick Douglass, an American Slave. Due to the fact that Equiano was not a slave for a long period of time, nor does he suffers the same severe treatment as other slaves, a point which Equiano acknowledges. Equiano’s captivity reads as one chapter in many chapters of an eventful life. His slavery did not mark his soul as it did others who went through it. Despite these slights, I recommend The Life of Olaudah Equiano, Equiano tells an exciting tale; after all of these years the book is still worth reading.

Read Palgrave Macmillan’s description of The Interesting Narrative Of The Life Of Olaudah Equiano: Written By Himself.