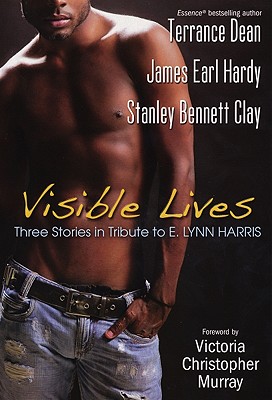 Visible Lives: Three Stories in Tribute to E. Lynn Harris is an anthology aptly described by its title. The authors, Terrance Dean, James Earl Hardy and Stanley Bennett, each writes a story to celebrate the artistry and personal friendship they had with the late E. Lynn Harris. I can think of no better way to honor Harris than to compile an anthology full of good stories. There is not a clunker in the bunch.

Author Terrance Dean gets the ball rolling with The Intern. Chase Kennedy is the Director of Programming for a major network in New York City. He has been burned by love one too many times. After the latest episode of having to hide in the closet as his lover's wife is banging on the door with a gun, he has had enough. One day, Quincy Thornberry, begins a summer term as an intern. Suddenly, Chase's romantic life makes a change for the better, if Chase can give Quincy, and himself, a chance to seize the possibilities.

The Intern is the first time I have read Terrance Dean. I like what I read…a lot. The story sparkles. It took me back to the days of when I first discovered E. Lynn Harris's Invisible Life and Just as I Am. Dean brought the romance. Chase is such a sympathetic character that I couldn't help but cheer for him. The thing that sent me over the top about this story was the ending! What a hell of a twist!! The ending took me immediately to stage three of shock; it had my mouth wide open with no sound coming out. Dean got over. If he chooses to continue this story, I'm going to be dead on it.

Is it Still Jood to Ya? is James Earl Hardy's contribution to the anthology. Hardy's story is more or less the final chapter of the Mitchell and Rahiem love story, which began with Hardy's 1994 debut novel, B Boy Blues. I started out loving the novels that chronicled the couple's relationship. By the time I read the fifth novel, A House is Not a Home, the bloom had definitely fallen off the rose. I needed a break from Mitchell and Rahiem, unfortunately, I got it. With the installment of Is it Jood to Ya?, I did not realize how much I missed them and wanted a happy ending for the two. I could not think of a more appropriate way of sending Mitchell and Rahiem into the land of happily ever after than in this anthology. I also missed Hardy's voice and I hope that this is not the last time I hear it.

Stanley Bennett Clay's contribution to the anthology is The House of John. Jesse Templeton, III, a near 40 years old photographer has just caught his partner, Sean, cheating on him. After moping around for a time, at the insistence of his friend William, Jesse goes on a vacation to lick his wounds. Jesse's vacation destination is a hum-dinger, a hotel where he gets to choose from a selection of men, who he wants to have sex with, all night, every night. While Jesse was expecting to bop his brains out, he ends up finding the love of his life.

I LOVED The House of John! If Zane wrote gay male erotica, it would look like The House of John. The story has it all. It's not just about sex or romance, the story has meat on its bones. The characters are fully developed. The story has its own rhythm and its setting is exotic and finely detailed. Clay placed me in the middle of the story and I watched it unfold around me. I was captivated. Clay produced a richly textured story that I could have eaten out of a bowl with no hands.

Visible Lives accomplishes what it set out to do, sing praises to E. Lynn Harris. Visible Lives aside from being a tribute is a damn good anthology in its own right. I loved it and highly recommend it.