Book Review: Blues From Down Deep 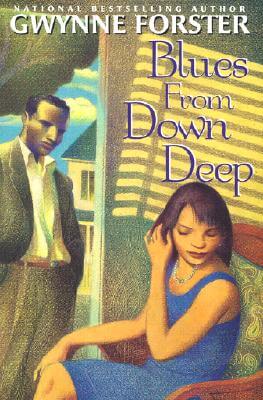 Read a Description of Blues From Down Deep

A summary of Blues From Down Deep might read: Regina Pearson, a 40-something year old woman, grew up in Hawaii with her father. When he passes away, Regina is alone. As she goes through her father’s possessions, she comes across a letter that was addressed to her deceased mother 40 years ago. This discovery renews Regina’s desire to find the family she knows nothing about. Her search leads her to her aunt, Maude in North Carolina. With a new man in her life, and in the company of her newfound blood relatives, Regina learns the true meaning of family.

But the synopsis does not tell the real story. In case it is not obvious, I did not like Blues From Down Deep. The novel is an exhausting, unsatisfying tale that cries out for scissors and a red pen to be taken to it. Much of the book would be hard to believe even if it was a fairy tale. The characters got on my nerves. The rhythm of the novel wasn’t appealing. I simply wasn’t happy with it.

The novel flowed like molasses in January. Forster stretched the story out so much it lost all elasticity. Its not that any of the scenes were excessively wordy, but my complaint is that it took Forster so long to get to the heart of the matter, by the time she got there, I didn’t care. For instance, Regina moved to North Carolina and begins a love-hate dynamic with Justin, an interior designer for the hotel where she works. Forster does a fine job establishing the sexual tension between these two. But, by the time they act on their feelings for each other, the whole thing was anticlimactic.

The principal storyline suffers from the same poor sense of timing, and an inadequate conclusion. A couple of the characters still had secrets by the end of the novel which ticked me off. One of the fringe benefits of reading a novel is discovering the secrets of its characters. In Blues From Down Deep, this benefit was denied. At the end of the novel when all things should be clear and I know who-shot-John, Forster withheld information, such as the true parentage of a few characters, and the reason for Regina’s parents’ exodus. When Forster did allow the briefest peek into the origin for the estrangement in Regina’s family, I sensed what should have been the lifeblood of this novel. But in place of an intriguing and intense family drama, I got overblown romances.

Speaking of romance, not every novel should include one. Injecting romance in a novel where it doesn’t belong is the equivalent of putting speed bumps on the Indianapolis 500. It slows the momentum and disrupts the flow of the principal storyline. Blues From Down Deep suffers greatly because Regina’s romance with Justin, and Maude’s marriage to Johann. I could have done without them.

My main problem was with Regina. I couldn’t stand her. She is full of illogical contradictions. Regina is a 40-plus year old woman who is also unbelievably naive. My three year old niece Belle ain’t as na’ve as Regina. With Regina, I had nothing but questions that went unanswered. Regina constantly states that she has an overwhelming desire to be around other black folk since she was raised in Hawaii and knew little about black culture. I ain’t buying it. Los Angeles, a city with plenty of black folks in it, is an approximately three-hour flight away from Hawaii, so why didn’t Regina just catch a plane? No children bound her and she didn't believe her father loved her, so why did Regina stick around Hawaii as long as she did? Hold up, I ain’t through. Okay, Regina has been longing for a family since Lassie was a pup. She arrives in North Carolina, meets her aunt, runs into her grandfather and that’s it. Regina has an uncle that lives in the same town with his wife and children and yet she makes no attempts to meet him? Regina goes on about her mother dying when she was very young — so young that she doesn’t remember her. Now people who knew and loved her mother surround Regina. Does she have even one conversation to learn more about her mother? If she did — you did. Regina just doesn’t make sense.

Blues From Down Deep is a prime example for enforcement of a "truth in advertising" law. Instead of the promised family drama, I was treated to bland, tedious romances that began with solidly constructed sexual tension that withered from disuse, and a silly main character. The title, Blues From Down Deep, is how I felt during and after reading this book.

Read Kensington’s description of Blues From Down Deep.