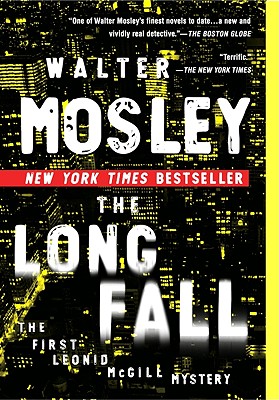 Read a Description of The Long Fall: The First Leonid McGill Mystery

I started Walter Mosley’s The Long Fall with a bit of left over anger and some anticipation. I’m not going to lie, I did not ever think that I would feel anxious or excited about Mosley again since he ended his Easy Rawlins series. Yes, I was one of those diehard fans of the Easy Rawlins mysteries. As illogical as it may seem, I took the completion of the series rather hard. I admit I backed away from Mosley for a minute. When The Long Fall made its debut, I did not know that the novel existed and did not care. When I saw the sequel of The Long Fall, Known to Evil, about to come out, I decided to give Mosley another shot. Before I got off into Known to Evil, I had to read The Long Fall first. I hate starting a series in the middle or tail end of it, so I had to get a copy of The Long Fall and read it first. Man, am I glad that I did. In short, the novel is brilliant! I have never been so in love with Mosley as I am right now. The Long Fall is a diamond of a novel; hard with cutting edges that sparkles enough to light a dark room.

Leonid McGill is a man with redemption on his mind. An ex-boxer, who couldn’t take being in the ring; McGill is a private investigator who has a life filled to the brim with regrets. His home life is not happy. He’s married to a woman he doesn’t love or trust. Only one of his three children is biologically his, which, oddly enough, is the one McGill does not like. McGill is changing his life and the way he does business. He is going to walk the straight and narrow. He’s not going to fall back and do business like he use to: setting innocent folks up, using every crooked method to make the ends meet the way he wants them to. McGill is turning over a new leaf. While the leaf is in the middle of its turn, Ambrose Thurman comes into his life with a job: find the real identity and location of four men. The only information Thurman provides are the childhood nicknames these men went by. McGill is to identify and locate these men, nothing more. After Thurman promises that no harm will come to these men, and McGill has bills that need to be paid in a hurry, McGill takes the job and all hell breaks loose. McGill may not be alive long enough to completely turn the new leaf, or the old leaf either for that matter.

I confess that I threw my own self for a loop when I decided to read The Long Fall. I was a tad upset with Mosley after I read his novel Blonde Faith, the last installment of the Easy Rawlins mysteries. I was sad. I was mad. I did not want to read Mosley any more. It took Crystal, a regular poster on the discussion board, to sum up what I was feeling. I was in mourning. I was mourning the demise of Easy, Mouse, 1950s and 1960s Los Angeles, and everything associated with that wonderful series. Rereading those novels would not help me get over the heartbreak. I was missing Easy Rawlins and damn it, it HURT! I, unconsciously, went on a Mosley strike. Even though I love some of Mosley’s other novels, love the Fearless Jones series; those books did not take the place of Easy. As Betty Wright said in that one song, "it’s going to hurt til it stops hurting." The hurt did stop, because I found my interest piqued with the Lenoid McGill mysteries. I wanted to give the novel Known to Evil a try, but first I had to read The Long Fall and I’m so glad that I did.

Although Lenoid is no Easy, Mosley has created one hell of a character in Lenoid. Lenoid is a hard man. It is his vulnerability that he hides from the world that makes me like him, feel for him. He has a messy, violent life that makes him a prime candidate to be the foundation of a mystery series. It’s hard not to like him. Lenoid is surrounded by compelling characters as well, especially his youngest son Twill and former assassin Hush.

The mystery, or should I say the main mystery in the novel is a hoot! I declare that Mosley has actually gotten better in constructing a solid mystery. Please don’t misunderstand me; Mosley was no slouch in the mystery department EVER. It’s one of the reasons I loved the Easy Rawlins mysteries as much as I did. Mosley was already at the top of the game, but with The Long Fall, he’s among the clouds and he’s sitting up there all by himself.

The Long Fall is magnificent, a worthy successor to the Easy Rawlins series. The initial outing of the new Lenoid McGill series firmly establishes Mosley as a maestro in the mystery genre. The Long Fall is all that and then some.

Review of the second book in this Series: Known to Evil
http://aalbc.com/reviews/known_to_evil.html