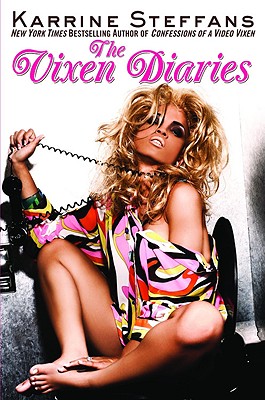 Read a Description of The Vixen Diaries

"From the night we met in April 2005, I knew he was the one for me and that I would love him all the remaining days of my life. Our relationship was as close to perfect as one could have. He did all he could to please me, but I was ungrateful.

Our differences in age and culture never seemed to matter until I realized how poorly trained and inexperienced I was in the art of relationships' He is the love of my life, and I know that no matter where we are or who we're with, our hearts are joined."
--Karrine Steffans on her failed relationship with Bill Maher (pgs. 143-144)

When Confessions of a Video Vixen was published a couple of years ago, Karrine Steffans wasn't at all hesitant about revealing the identities of the A-list celebrities, many of whom were married, she had slept with while working in Hollywood as a dancer in gangsta rap videos. That compelling kiss-and-tell memoir proved to be well worth its weight in gold as a cautionary tale for any na've young females thinking about taking a shot at showbiz. The single-mom's eye-opening page-turner recounted a frightful spiral to the depths of despair and ended with an optimistic postscript about her subsequent recovery and redemption.

Unfortunately, The Vixen Diaries fails to measure up to Steffans' first book, as she is apparently no longer inclined to dish the dirt, if she has any dirt to dish. So, although she's remains a shameless namedropper, virtually each entry is accompanied by a denial of any romantic liaison.

Comparing herself to Flava Flav, an equally-notorious character curiously capable of countless sexual conquests, Karrine claims that her recent suitors have included Halle Berry's ex-husband Eric Benet, Jamie Foxx, Dennis Rodman and Bobby Brown, to name a few. But while they might have had the hots for her, she apparently is saving herself with hopes of reconciling with her ex-boyfriend, comedian Bill Maher.

Here's what she does have to say about some of her platonic pals:

So, the woman who once referred to herself as "Superhead" seems determined to distance herself from a status staked on fellating the famous. Yet, it's also clear that she has sadly slipped back into some of her self-destructive ways, as she admits to sleeping with a series of losers lately. This, in turn, led to her attempting suicide, being institutionalized and losing custody of her eight year-old son to the foster care system temporarily.

Thus, when all is said and done, it's a little hard to believe Karrine when she asserts, "The fact is I've changed since the stories in Confessions were a reality in my life" I cannot write the same book again, because I am evolving into a different person.' The wild and wanton behavior she describes hasn't changed all that much, except she's just hanging with Average Joes and has-beens instead of celebs anybody cares about.

Clearly, she's pining away for Bill Maher, whom she admits to abandoning ill-advisedly out of boredom because she craved the insanity and depravity of her former hip-hop lifestyle. In sum, while revealing its emotionally-vulnerable author as still unstable, The Vixen Diaries is otherwise a 200-page plaintive cry for help that ostensibly only Mr. Maher can answer.

Karrine, is interviewed by Troy Johnson founder of AALBC.com on October 3rd 2007

The Confessions of a Video Vixen (2005) - Interview with Kam Williams
http://aalbc.com/reviews/karrine_steffans.htm

"She wrote [Confessions Of A Video Vixen] to expose on Jay-Z, Ja Rule, P Diddy and all these other guys in hip-hop, and now we can see her just before she joined those guys," Howard Levine, national sales manager of Vivid, told AVN.com. "Before she blew the lid off the hip-hop world, she blew Mr. Marcus."

Mr. Marcus narrates the intro to the video and also serves as Steffan's co-star, who she performs her legendary oral skills on. Marcus remembers the video model's attributes quite well.

"The thing that stood about her was that she gave incredible head," he told AVN.com. "She created something off that one act that people are still talking about today."