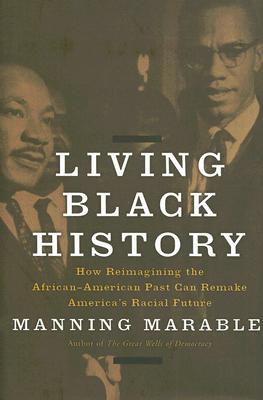 Read a Description of Living Black History: How Reimagining the African-American Past Can Remake America’s Racial Future

’Since race itself is a fraudulent concept, devoid of scientific reality, racism can only be justified through the suppression of black counter-narratives that challenge society's understanding about itself and its own past. Racism is perpetuated and reinforced by the historical logic of whiteness, which repeatedly presents whites as the primary actors in the important decisions that have influenced the course of human events.

There is considerable historical evidence that undermines the coherence and legitimacy of that master narrative of American history. Why do the great masses of white Americans remain unmoved?

For them, the white past by its nature is remote from the present; the black reveals nothing but an abyss. This explains to a considerable extent why most white Americans refuse to question the meaning of whiteness, or to acknowledge that white racial identity is a social construction.

By contrast, for us, the past is not simply prologue; it is indelibly part of the fabric of our collective destiny. Indeed, this alternate understanding of history is the most important quality that makes African-Americans, as a people, different.’

’Sampled from Chapter One

How do you explain the fact that, in general, blacks and whites have such diametrically-opposed, basic attitudes about America? For instance, whites tend to feel so fervently patriotic about the country's core myth as a shining model for liberty that they have no problem with a President intent on forcing this brand of democracy on resistant foreign cultures located halfway around the world.

Blacks, on the other hand, believe that ’the darkest aspects of American history’ remain suppressed in favor of idealistic notions about a freedom which they have never enjoyed. As a result, blacks have never become fully American, since to do so one must internalize the legitimacy of the prevailing narrative about the nation as a colorblind land of opportunity.

This is thesis espoused by Dr. Manning Marable in Living Black History: How Reimagining the African-American Past Can Remake America's Racial Future.

Marable, a professor of history, political science and public policy at Columbia University, is a syndicated columnist and the prolific author of 19 books.

This genesis of this bold opus originated with a series of dissertations which he delivered as a visiting lecturer at Harvard. The treatise opens with its strength, first a chapter focusing on the distinctions between black and white perspectives of America, followed by another mapping out black political culture.

The balance of the book is encyclopedic in nature, and devotes equal space to a trio of pivotal figures in African-American history, namely, W.E.B. Du Bois, Malcolm X, and NAACP attorney Robert Lee Carter, one of the lawyers who won the landmark Brown vs. Board of Education case.

In essence, then, Living Black History is a two-part treatise. The former sounds a clarion call to legitimize the legacies and contributions of blacks negated by the mainstream point-of-view. And the latter sets out to do exactly that by recasting several slighted African-Americans as heroes equally, if not more deserving of the revered status ordinarily reserved for the Founding Fathers.