Book Review: Get Real, Get Rich: Conquer The 7 Lies Blocking You From Success 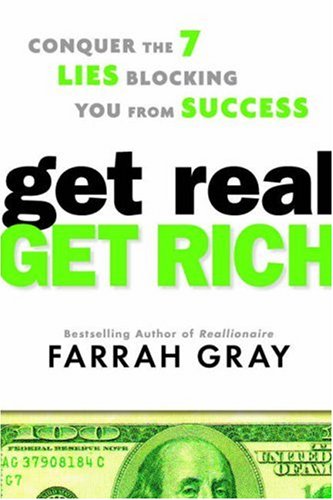 Read a Description of Get Real, Get Rich: Conquer The 7 Lies Blocking You From Success


“News flash: There's no such thing as automatic wealth -- at least not in the real world. Of course some people will have you believe that wealth starts with a way of thinking and then moves effortlessly toward real wealth.

In this book I challenge you to move beyond the conversation and really grab at your accomplishments. I'm not only going to share the mindset you need to achieve all that you dream of, but also the specific strategies that accompany that state of mind…

What's holding you back? The answer to that question is what this book is about… You might be oblivious to the fears and fallacies that are thwarting you financially, spiritually, emotionally, and even physically… I want to help you marshal out your own wealth potential, which relates to everything about you — not just your bank account.”
—Excerpted from the Introduction (pages xxii-xxiii)

Thanks in part to Oprah Winfrey's stamp of approval, The Secret has been enjoying a phenomenally run and is still sitting high on most best seller lists a couple of years after its 2006 release. That popular self-help book's basic thesis is that positive thinking alone is enough to attract all the wealth, health and happiness you want. If only it were just that simple.

As a skeptic who questions the wisdom of relying on that philosophy, I'd guess that a lot more is probably involved in achieving one's dreams than a mere attitude adjustment. So, I suspect that there are many devotees with buyer's remorse who find themselves frustrated that the money hasn't simply come pouring in after they adopted the mindset dictated by The Secret.

I digress at the outset only to contrast the approach of The Secret with that of Get Real, Get Rich. I call this refreshing alternative The Un-Secret, since its strategies are grounded in a reality-based recipe for success which is a combination of not only attitude but also skills and commitment.

Written by “Reallionaire” Dr. Farrah Gray, this relatively-feasible how-to guide is designed to empower individuals to maximize their potential, whatever that may be. However, in Dr. Gray's opinion, this involves much more than chanting positive affirmations. So expect to do some serious work along the path to fulfilling your goals.

You might be wondering, Why should I listen to this author as opposed to the countless others offering advice about how to get rich? Perhaps because he speaks from experience. He was raised in the ghetto, on the South Side of Chicago, by a single-mom, yet he still overcame the odds and made his first million dollars by the age of 14.

And as fascinating as this admirable wunderkind's personal story is, it's the practical ideas shared in Get Real, Get Rich which make the book worthwhile. For Farrah, now 23, exhibits a wisdom beyond his years, and an infectious eagerness to inspire others to outdo him in terms of achievement.

For example, in a chapter entitled, The Money Lie, he emphasizes the importance of living below your means, in order to avoid going broke. While that sage insight might seem to some like common sense, taking the notion to heart is likely to make all the difference in your life.

What can I say about this exceptional role model except “I'm a believer!”

Read Dutton’s description of Get Real, Get Rich: Conquer The 7 Lies Blocking You From Success.