Book Review: Rooftop Diva: A Novel Of Triumph After Katrina 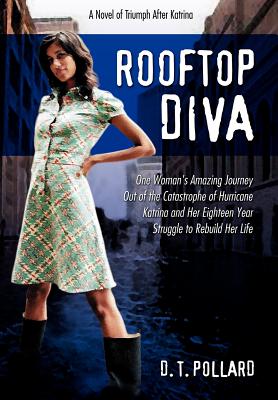 Read a Description of Rooftop Diva: A Novel Of Triumph After Katrina

D. T. Pollard's novel, Rooftop Diva became an Essence bestseller novel in 2007.  This fictionalized account put a different spin on a survivor of Hurricane Katrina. Pollard's story of the beautiful Monique Devareaux and her 18 year struggle to rebuild her life is told in this novel.   I enjoyed the story and the aut    hor's way of mixing a factual event with  fictionalized characters.  To pull it off as well as he did took a great deal of skill.

Monique at age 28 had returned to her birth place of New Orleans to live with her 80 year-old wheelchair-bound grandmother after a failed relationship in Chicago where she was working left her bruised and broken.  She was just beginning to heal  when the levees broke and sent the flood waters rushing into New Orleans.

She had managed to make her way to the rooftop of the house where she was raised by the elderly woman when her own mother had passed away.  For three days, Monique was trapped on that rooftop running out of both food and water and braving the heat and the sun until finally a helicopter rescued her from her rooftop perch and took her to an aide station that the City had set up for the victims.  She was homeless, destitute and alone in the world realizing her grandmother had not survived.  She is taken to a shelter in Dallas where she is forced to re-invent herself and start anew.

This is a heart-wrenching story of how one woman's strength and faith against all odds allowed her to survive and thrive in a situation that many others would have failed.  Pollard tells a detailed story and has created a novel that is both emotional and inspirational.

Monique is befriended by an affluent woman who helps her to get back on her feet.  She sees something special in Monique and introduces her to a world unlike her own where power and the almighty dollar is king.

The drama builds with a suspenseful incident when the antagonist, a lesbian by the name of Mel Hawkins approaches Monique at the shelter.  An inmate from the local jail; Mel was able to escape and disguise herself as one of the evacuees.  When Monique refused her advances, she makes an enemy of the woman who plots to repay her for rejecting her.  The drama builds as Mel stalks Monique ending in a violent attack on her life.  Still Monique recovers and moves on with her life.

This book is filled with drama that will draw the reader into the story from one chapter to another.  I enjoyed Rooftop Diva and highly recommend this novel.

Read iUniverse’s description of Rooftop Diva: A Novel Of Triumph After Katrina.