Book Review: I Am Jackie Robinson 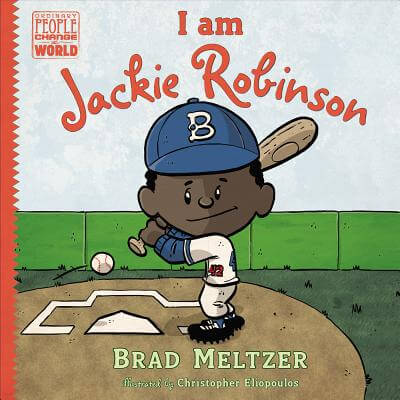 Read a Description of I Am Jackie Robinson

“Jackie Robinson learned to be brave when he was very young. He grew up in a time when he was not allowed to socialize or take part in activities because of the color of his skin. He was teased, isolated and bullied.

As a child, he found support in sports, blowing everyone out of the water with his unparalleled athletic talent. Jackie knew that sports were best when everyone, of every color, played together.

When his skills were finally recognized by the Brooklyn Dodgers, he made history as the first, black, major league baseball player. Jackie Robinson broke the racial barrier in sports, and was brave enough to be first.”
— Brad Meltzer on Jackie Robinson

Brad Meltzer was born in Brooklyn, which is where Jackie Robinson broke baseball’s color line when he joined for the Dodgers in 1947. But that’s not what inspired the best-selling author to write I Am Jackie Robinson. Rather, the father of a daughter and identical twin boys had grown tired of watching his children admire reality-TV stars and trash-talking pro athletes as if they were true heroes.

These attention-seeking celebrities were famous, yes. But were they worth emulating and looking up to? No. As Brad puts it, “I wanted my kids to see real heroes… and real people no different from themselves.” So, he decided to publish a series of books for young readers touching upon the real-life childhoods and achievements of such icons as Dr. Martin Luther King, Abraham Lincoln, Rosa Parks and Albert Einstein.

This colorfully illustrated installment, appropriate for ages 3 and up, revolves around the coming-of-age of Jackie Roosevelt Robinson. We see how he felt the sting of racism (in the form of ethnic taunts) and segregation (exclusion from a “White Only” swimming pool) during his formative years.

But never becoming embittered, he instead learned some very important lessons about tolerance and self-control from his single-mom and his surrogate father figure which would later serve him well. Jackie proceeds to excel at sports on the road to adulthood and, ultimately, makes history in the majors.

A worthwhile opus which drives home the salient point that Jackie's immortality would’ve been impossible without a solid foundation borne of hard work, humility and a cornucopia of other positive character traits.

Read Dial Books for Young Readers’s description of I Am Jackie Robinson.