Book Review: Between The World And Me

Read a Description of Between The World And Me

“In a profound work that pivots from the biggest questions about american history and ideals to the most intimate concerns of a father for his son, Ta-Nehisi Coates offers a powerful new framework for understanding our nation's history and current crisis.

Americans have built an empire on the idea of ‘race,’ a falsehood that damages us all but falls most heavily on the bodies of black women and men—bodies exploited through slavery and segregation, and, today, threatened, locked up, and and murdered out of all proportion.

What is it like to inhabit a black body and find a way to live within it? And how can we all honestly reckon with this fraught industry, and free ourselves from its burden.

Between the World and Me is Ta-Nehisi Coates' attempt to answer these questions in a letter to his adolescent son.”
—Excerpted from the book jacket

Ta-Nehisi Coates garnered national attention a year ago when he published “A Case for Reparations” in the Atlantic Monthly magazine. Now, the progressive pundit is back with Between the World and Me an equally-incendiary assessment of the state of race relations in the United States. 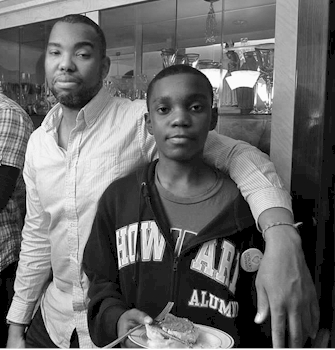 The book is basically designed as an open letter from Ta-Nehisi to his 15 year-old only-child, Samori. The author fears the boy might suffer the same horrific fate as African-American youngsters like Trayvon Martin and Jordan Davis who were killed on a whim by white men for the “crimes” of walking home while black and listening to loud music, respectively.

Ta-Nehisi writes in a free-flowing, stream-of-consciousness style reminiscent of Allen Ginsberg in the epic poem “Howl.” However, this relatively-substantial opus is more of a history lesson than an escapist dirge.

For, whether he's talking about dating an East Indian beauty, a classmate with Jew dreadlocks or the woman he would eventually marry, Ta-Nehisi invariably views every aspect of his life through the prism of race. As he sees it, skin color narrowly determines not only one's treatment but one's fate in this country, a burden that is almost too much to bear when it comes to being black.

Taking no prisoners, the fearless firebrand indicts everything from “democracy” to “whiteness” to “American exceptionalism” for the plight of his oppressed people. His hope for Samori is “to have your own life, apart from fear.” But he believes this nation still has a lot of work to do to arrive at a place where black lives indeed matter.

What higher praise could Ta-Nehisi ask for than the blessing of Nobel laureate Toni Morrison who christens him as the long-awaited visionary finally filling the intellectual void left in the wake of the passing of James Baldwin.

Read Spiegel & Grau’s description of Between The World And Me.