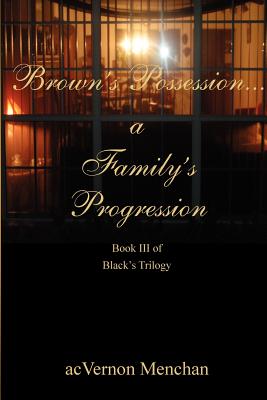 To say that the books in acVernon Menchan's trilogy; Black's Trilogy are about a complicated love story is like saying water is wet.  Complicated is the least of it.  In these books the author shows the many ways that people love and why.  I was intrigued by this story as it unfolded and went from one book to another with anticipation.  This review is a three-book review.

The first book; Black's Obsession introduces us to Malcolm Black, self-made millionaire who has recently returned to his Florida hometown to re-plant his roots and bond with his family.  Black believes in giving back to the community and uses his fortune to set up minority-owned businesses and training programs within the Black community where he grew up. He literally re-invents the old neighborhood in the area of housing, business development and recreation. In his personal life; Black was the proverbial ’player’, bedding women one after another and never settling down with any of them because of his unrequited love for his childhood friend, Cinnamon. No woman every came close to what he saw in her.  The book shows us how a man can continue to love a woman that he has never had access to.

In Cinnamon's Universe, we meet that woman, Cinnamon DuBois Brown. Cinnamon and Black grew up together and although she was a few years younger, they had many classes together and became good friends.  Cinnamon was a beautiful girl and a gifted student who had skipped several grades over the years.  She came from an upwardly mobile African American family and Malcolm was intimidated by them because his family's humble lifestyle was not on the same level.  Malcolm not only adored Cinnamon; he worshiped her and but yet, he never revealed his feelings to her.  When she finally connected with and married a mutual friend; Malcolm left Florida and moved to New York City, heartbroken and torn. He had lost the love of his life to his friend Brown because he never declared his love for her.  Soon after Brown and Cinnamon relocated to Atlanta where they have raised a family, started a business, and become quite successful also.  Book Two is about Cinnamon, a woman whom everyone loves and admires.  Friends and family alike, depend on Cinnamon's love and attention to make everything right in their world.

When life finds Black, Cinnamon and Brown back in Florida living in their hometown again; the story begins to get complicated.  An unusual love triangle develops when Black finds that he can no longer deny the love he feels for Cinnamon.  So he comes out and professes his love for his long time friend.  Brown had always known about Black's feelings for his wife but he was never threatened by it because he knew that Cinnamon was a faithful woman who valued her marriage and her family life. But everything is different now.  Their children have grown up and Cinnamon has started writing for a magazine and working on her first book.  She is asserting herself in new ways and is no longer the doting wife and mother.  Brown knows that he has to do something to hold on to his precious Cinnamon.  The final book in the trilogy, Brown's Possession . . . a Family's Progression was just released and it continues the saga just as everything is about to come to a head.  They all have to decide whether they can make this work and continue to coexist peacefully as a family.

This trilogy was an incredible read.  AcVernon Menchan is a really good writer who writes from the heart.  Her prose is fluid; yet down to earth.  She tells a great story and has the skills of a good storyteller in the old African American tradition.  A griot of sorts, she tells her stories with wisdom and old-fashioned mother wit.  The entire three book set is a good investment if you are a reader who enjoys a continuing saga.