Book Review: What If It Feels Good? 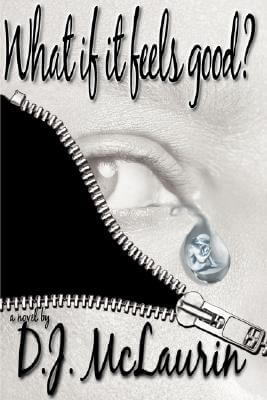 Read a Description of What If It Feels Good?

It's A Thin Line Between Seduction and Child Abuse

This debut novel, What If It Feels Good? by D.J. McLaurin was a rip-roaring read full of love, betrayal and revenge.  Secrets, lies and dysfunctional family relationships are at the core of the storyline that keeps the reader guessing; but reading on until the last page is turned.  I was very impressed with the skills of this new writer.  Her gift of writing dialogue that is very real and expressive gave the novel a well-tuned style, not usually found in first time novelists.

Michael Bagley is a kid from the wrong side of the tracks, living in poverty and despair.  The only child of a devoted; yet dysfunctional single mother who works as a stripper for a living, Michael has seen more of real life than your average 14 year-old.  However; Michael is a survivor and he does what he has to do to survive and to keep his mother safe.  This lands him in a juvenile detention home for the attempted murder of his mother's abusive boyfriend.  What happens next is not your usual ’poor kid from the ghetto’ story.  Michael is also a very wise soul for his age.  He a gifted child with a high IQ and many creative gifts.  However; just surviving form day-to-day has always prevented his gifts to show.  This main character had so many dimensions that added to the interest of the story.

Michael's natural father finally becomes aware of his existence and is granted custody of him.  This is where Michael's life changes abruptly and for the better.   Michael's father is a multi-millionaire.  Although he has a wife and other children; Joe steps in and seeks to make up for being an absent father.  Michael is suddenly plunged into a life of opulence after living in poverty since he was born.  How this father/son relationship plays out was remarkably scripted.

As Michael adjusts to his new family and the opportunities for a bright future; he is also swept up into the seduction of love with an older man.  This man is Chachi, his father's best friend and business partner.  Crossing the line between seduction and sexual abuse of a minor; this relationship creates an explosion that rocks the lives of everyone involved.

Fully developed main characters and secondary characters that make them seem like real people to the reader and very descriptive settings made for an outstanding read for this reviewer.  I don't want to give away the story so I invite you to read this book for yourself.  This novel is gritty in some places, sentimental in others but you can be sure it will capture your attention and touch your heart with each and every chapter.  What If It Feels Good by D.J. McLaurin is a hidden jewel for serious readers of good African American fiction.  I recommend it highly.

Read Taylor Nicole Publishing’s description of What If It Feels Good?.