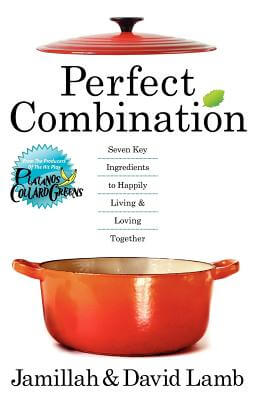 by Jamillah Lamb and David Lamb

“Jamillah and David Lamb are the dynamic couple behind the successful Off-Broadway play ‘Platanos Y Collard Greens’ which is enjoying its 9th year-running. For years, they have worked side by side, 24/7, to create and build their business. And, not only have they not killed each other, their love has grown stronger.

This insightful relationship guidebook is part love manual and part diary, as the couple explores important and intimate topics. Honest and… hilarious, Perfect Combination offers seven key ingredients for anyone to create their own recipe for Love and Happiness and to achieve the perfect balance of love, hard work, friendship and respect.”
—Excerpted from the book jacket.

Jamillah and David Lamb’s love story is a rarity, a real-life fairytale. They’ve pretty much remained inseparable since falling in love at first sight, and God has recently blessed their union with a delightful daughter, Kaira.

And to think that heir paths could just as easily never crossed. After all, he was born and raised in New York City and she in Chicago, and they attended college in different cities.

But fate came into play after graduation, when they both were hired by the same investment firm, even though Jamillah was stationed on the West Coast, while David was on the East Coast. One day, his head was turned by the picture of an attractive colleague in a staff photo on the office wall, and he said to himself, “I’m going to marry that girl.”

So, he made it his business to meet Jamillah, and when the two were finally introduced at the company’s California headquarters, they instantly fell head-over-heels for each other. The couple’s feelings only intensified during their whirlwind courtship and continued to be nourished by their marriage, partnering as entrepreneurs, and starting a family.

Given how Jamillah and David had flourished seeming so effortlessly, it was only natural that, over the years, friends would frequently urge them to share the secrets of their success with the world. The upshot of that suggestion is Perfect Combination: Seven Key Ingredients to Happily Living & Loving Together, a book that is as much an introspective memoir as it is an instructional how-to tome.

As producers of the hit Off-Broadway play ‘Platanos Y Collard Greens’ it makes sense that they chose to publish their sage insights in recipe form. Thus, each chapter ends with a summary of “Key Ingredients,” under headings like “Lighten up!” and “It’s about balance,” followed by sensible tips for “Cooking with Love,” such as “Plan a surprise date for your partner” and “Write a love letter to each other describing your first date.”

The precious pearls of wisdom are served up gourmet chef-style. Consider this cute recipe for finding balance in a relationship which calls for: “2 Heaping Cups of Appreciation, 1 Cup of Self-Knowledge, 1 Cup of Modesty and 1 Cup of Trust.”

Betwixt and between delineating their seven steps to maintaining marital bliss, the authors treat us to a cornucopia of family photos from their childhoods, their romance, their work, their wedding, and the birth of their baby. Pictures must still speak a thousand words, because again and again the Lambs’ love for each other just jumps off every page.

An ongoing, Off-Broadway tale of black-on-black love and devotion overdue for the limelight!