Book Review: The New Paradigm for Financial Markets: The Credit Crisis of 2008 and What It Means 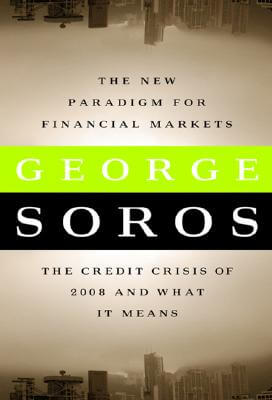 Read a Description of The New Paradigm for Financial Markets: The Credit Crisis of 2008 and What It Means

’We are in the midst of a financial crisis the likes of which has not been seen since the Great Depression of the 1930s' This crisis is not confined to a particular firm or a particular segment of the financial system; it has brought the entire system to the brink of a breakdown, and it is being contained only with the greatest difficulty. This will have far-reaching consequences. It is not business as usual but the end of an era.’
’Excerpted from Chapter 5 ’The Super Bubble Hypothesis' (page 81)

Was the bursting of the housing bubble just a momentary correction or the tip of the iceberg of an economic crisis about to envelope the entire country? George Soros believes we're looking at the latter, and goes to great lengths to explain why, in his words, ’This is the first time since the Great Depression that the international financial system has come to close to a genuine meltdown.’

While the left-leaning billionaire might be best known for his criticisms of the Bush administration and for underwriting the efforts of MoveOn.org, many forget that he is also a brilliant businessman who amassed his great fortune speculating in the currency and stock markets. Now, with the publication of The New Paradigm for Financial Markets he shares with anyone who will listen exactly how we got into this mess, and where to invest your cash and dwindling resources to best weather the impending the collapse.

Though a bit dense at times in terms of statistical analysis, being awash in charts and graphs, the text is nonetheless the most fascinating contribution to the field of money management since the equally-absorbing best-seller Freakonomics. Interweaving politics with economics, Soros shows the role that greed and power have played in placing us in the current predicament.

For one, he rejects the classical economic theory which teaches that supply is a function of demand and vice-versa. Instead, he makes the radical argument that the supply and demand curves do not determine market prices at all; otherwise, we would generally witness greater price fluctuations.

Of far more consequence is power, which might explain why the cost of oil has skyrocketed since the election of a president who filled his administration with executives from that industry. ’The primary purpose of political discourse is to gain power and to stay in power,’ Soros states. ’Those who fail to recognize this are unlikely to be in power.’

This is why Bush was more than willing to manipulate the truth in any way he saw fit to deceive the public while furthering the interests of big oil and other corporate conglomerates he is beholden to. This arrogant attitude is reflected in the Orwellian comment of a White House aide quoted as asserting, ’we're an empire now, and when we act, we create our own reality’ we're history's actors' and you, all of you, will be left to just study what we do.’

The 77 year-old Soros survived living under Hitler, and then survived living under Communism, and is presently unafraid to speak out forcefully when he recognizes the signs of the emergence of another such totalitarian regime. A sobering blend of financial and political analysis which incorporates the pivotal role of shady shenanigans and corporate corruption in the rapidly-approaching decline of a supposedly free market.

Read PublicAffairs’s description of The New Paradigm for Financial Markets: The Credit Crisis of 2008 and What It Means.