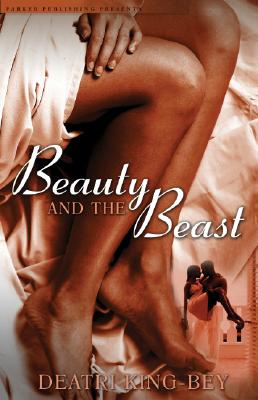 Read a Description of Beauty and the Beast (Noire Allure)

Deatri King-Bey has stepped out of the box and given her readers a Black fairy tale in Beauty And The Beast that I really enjoyed.  Set in modern day Chicago; the story centers around millionaire business mogul, Bruce Maxwell, the beast and his beauty, Nefertiti Townes.

Bruce and Nefertiti grew up together as playmates, she being the god daughter of his beloved Aunt Victoria who took him in as a young boy when he was abandoned by her wayward sister.  They shared a childhood of good times and as they approached adulthood; they both realized that there was a connection between them that was more than platonic.

However; Bruce's emotional dysfunction from having faced the rejection from his mother at such a young age did much to discourage him from pursuing the love he felt for Nefertiti.  Although his aunt worked hard at loving him and giving him a secure life as his surrogate parent; Bruce never was far from the pain that his mother's actions brought into his life.  Bruce had suffered from a mood disorder most of his life and his behavior sometimes had characteristics of a real ’beast’.  His anger could be over the top and after years of therapy and changes in various medications; he had decided not to medicate.  As a result; he hid himself away from the world.

Nefertiti on the other hand was the only child of two loving parents and a ’Daddy's Girl’ at heart.  She did not understand why Bruce had suddenly become indifferent towards her affections.  She was hurt and offended by his change of heart towards her.

Nefertiti always had a love of art and was very talented.  She majored in fine arts in college and ended up the owner of several well-known art galleries in the area.  She eventually met and fell in love with someone and planned to marry her fiance when tragedy struck this beauty.

Bruce Maxwell was determined to make a success of his life and worked hard in the business world amassing riches beyond anyone's imagination.  His only interest was his business that he ran from Maxwell Manor, his opulent mansion on the outskirts of Chicago; that was until his beautiful Nefertiti was brutally attacked and knifed in a break-in at her home.  The thief did not expect her to be there and the beating left her near-death.  She also was scarred for life.  Bruce was enraged and for the first time in a long time, he allowed himself the privilege of acting on his feelings.

Bringing his beauty home to Maxwell Manor where she would be safe until her attacker's day in court arrived; the couple were thrown together with no other option than to examine the feelings that they always had for one another.  The love story that ensues is beautiful and tender.         The story line also takes the reader on the trail of drug dealers, the world of stolen art and murder.  It is a love story combined with drama, mystery and suspense.  It is not your average fairy tale.

The author explores the meaning of beauty and how much it matters when there is true love.  She also brings awareness to anxiety and mood disorders and how this issue is dealt with in the African American community.  Beauty And The Beast kept me on edge, reading long into the night.  I was delighted with the ending and look forward to more stories by Deatri King-Bey.  This sister can really tell a story.  I know you will love this novel as much as I did.

My recommendation; buy this book!