Book Review: Billionaires & Ballot Bandits: How To Steal An Election In 9 Easy Steps 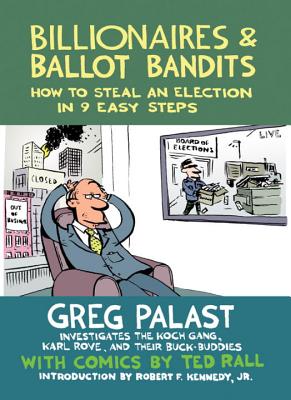 Read a Description of Billionaires & Ballot Bandits: How To Steal An Election In 9 Easy Steps

“When I was a boy traveling in Latin America, I saw colonial societies that were essentially medieval police states ruled by outsiders in cahoots with a few wealthy local families… Maintaining such power required these cohorts to build propaganda machines to deceive the public, control the press, fix elections, break unions, and maintain a strong and often brutal police state in the name of ‘national security.’

America today is looking more and more like a colonial economy, with a system increasingly tilted toward enriching the wealthy 1 percent and serving the mercantile needs of multinational corporations with little allegiance to our country… American democracy is under assault… Our campaign system has become legalized bribery… Voter suppression is real… and it is happening to YOU!

Remember, this is YOUR democracy… If your vote isn’t counted, you’re going to lose the presidency—and our democracy.”
—Excerpted from the Introduction by Robert F. Kennedy, Jr. (pgs. 9-14)

There’s no reason for Democrats to feel giddy about the upcoming election just because President Obama appears to be pulling away from Romney in recent polls. They might be advised to temper any irrational exuberance in light of the late Joseph Stalin’s chilling warning that, “Those who cast the votes decide nothing; those who count the votes decide everything.”

Unfortunately, the Communist dictator’s words might be as relevant in the U.S. today as they were when he ruled Russia with an iron fist. After all, it can be argued that Bush only prevailed in 2000 and 2004 with the help of shady shenanigans like the illegal removal of thousands upon thousands of registered blacks from the voter rolls.

That is the contention of investigative reporter Greg Palast, author of Billionaires & Ballot Bandits: How to Steal an Election in 9 Easy Steps. In this very timely tome, he delineates each of the methods employed to steal a contest, namely, purging, caging, spoiling, ejecting, blocking, rejecting, prestidigitizing, tossing and stuffing.

He further explains that African-Americans have a particular cause for concern, since over 50% of the voters prevented from voting are black. And this was the case before the passage of voter suppression laws in so many states with majority Republican legislatures.

In a chapter entitled “Why Obama Is Likely to Lose in 2012” Palast indicates that conservative strategist Karl Rove is well on his way to achieving his goal of eliminating the six million black votes needed to insure a Romney win. There is still hope for the democracy, however, that involves an eternal vigilance and a community commitment to fight to leave no vote behind.

A practical primer on how to exercise your right to vote on Election Day in the face of a calculated Republican multi-pronged plan to prevent you from casting a ballot by any means necessary.