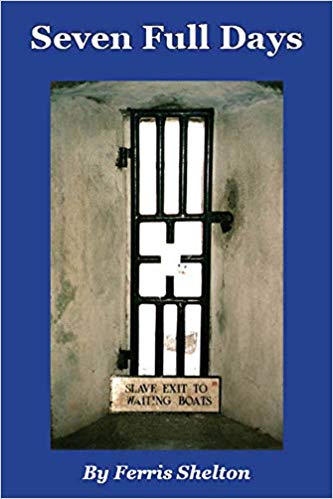 Ferris Shelton’s debut novel, Seven Full Days, is a cautionary tale of white racism, corporate burnout, and powerful identity issues. He crafts a black man, Jason Scott, chasing the American Dream at full tilt, discarding his self-pride and manhood. Sure, it seems the Atlanta businessman possesses all of the trappings of success: a loving wife, great home, and a prosperous career. However, the optics of living the high life are not what they seem. There are cracks in the perfect facade that appear to be growing, spreading from the base upward.

The book opens as Callie, Jason’s wife, becomes irritated while at a snobbish corporate shindig, listening to banal chatter of the executive wives. She decides to leave, searching for her husband in the crowd. Finding him sitting with the host, she is completely steamed at his Stepin Fetchit act, laughing at the bigoted jokes of his host. His wife is disgusted with him, accusing him of being a black man who hates himself.

Proud of his accomplishments, Jason counters his wife enjoys being the wife of a successful black businessman, all of its perks and pleasures. The verbal warfare continues between them with Callie growing increasingly peeved at her man’s “unbridled, out of control ambition.” He willingly does his master’s bidding, hoping for a promotion that was worthy of his abilities.

While Shelton does well with the characterizations of Jason and his spouse, attempting to balance their strengths and flaws, he stretches his imagination with his surreal Fellini dreams that echo the anguish and torment of Jason’s situation. The author uses his trip to Africa and the El Mina Slave Castle to form the basis of profound change in his lead character. The emotional turbulence caused by Jason’s relocation by Edwards Industries from Chicago to Atlanta rocks his marriage to Callie, the “good church girl.”

Other than holding his own as office manager, Jason knows he will not considered for a vice president post, although Bob Farrington, his boss, keeps dangling that plum job in front of him like a carrot. “You’re a good man and we need more like you,” the white man says. “I plan on bringing you right up the ladder with me as my right hand man. You’re black but a different kind of black. Clay and I were talking the other day and we both agreed that you were more a BASP. Instead of a WASP or a white Anglo-Saxon Protestant, you’re more a black Anglo-Saxon Protestant.”

But the cockeyed dreams persist. Jason tries to make sense of them while they increase in number and intensity. He meets a woman, who says she is an empath, warning him that he should be careful and that his life is in danger. As the dreams become clearer and more real, he realizes his dreams are in the dank, dark slave quarters in Africa before the passage. He realizes the beaten, marked, chained black men and women in the unbearable stench awaiting the long trip across the sea.

When the session by Dr. Caswell, a shrink of Grady Hospital, fails, Jason embraces the dreams as a call for personal change and growth. He begins researching Africa, especially the slave dungeons of El Mina in Ghana, and eventually flying over there to that nation on Christmas holiday. Knowledge is power. Knowing one’s history and culture are power as well. Shelton realizes this nugget of wisdom and employs it as the central theme of his inventive novel. In a world of diminished morals and sensibilities, he seems to be telling us that only by honoring our treasured past can we acquire the survival tools to exist in our modern present and develop our high tech future. In this work, the author asks us several deep questions. Some he answers, others he does not.

Read Off the Common Books’s description of Seven Full Days.