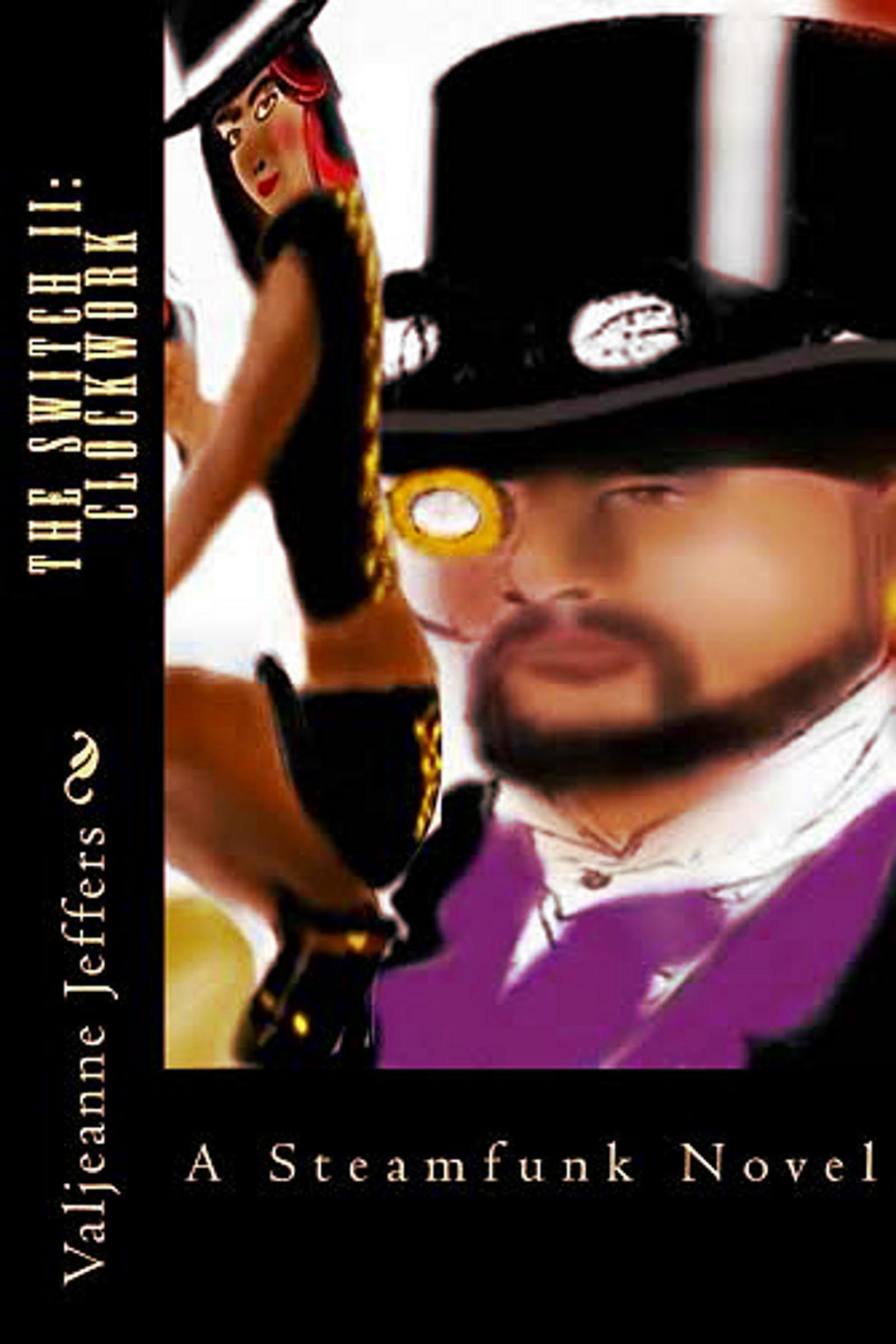 A blog by Valjeanne Jeffers

This is a short except from novella The Switch II: Clockwork. An excerpt from The Switch was published in Steamfunk! edited by Milton Davis and Balogun Ojetade.

Z100 stood on the tube platform waiting for the next car. She was dressed in a one-piece, white jumpsuit and thigh-high boots: standard dress for the upper city. Pods only seated three to a car, and were propelled by compressed air through tunnels that webbed across Tyrol. Access was granted through palm recognition scanners.

On her left, a Latino couple waited for the car. The man was dressed in a derby hat and striped pants with suspenders; the woman wore a bustier, and skirt with petticoats. Their musty smell reached her, and she wrinkled her nose in disgust.

At least these cars are self-cleaning.

An egg-shaped pod slid to a stop in front of her. She pressed her palm against the scanner and then shot an icy glance at the couple.

They looked away. They knew better than to try to ride with her. Under dwellers were not permitted to socialize with city residents, and only ventured above ground to work. They would wait for the next car.

The hatch door lifted and she stepped inside, sitting on a cushion beside the three-inch window. The pod sped off, and Z100 gazed out the window: the rounded towers of York were a blur of beige and white. In the distance, she glimpsed the tripod mansion of the supreme leader.

The car reached her platform. Z100 stepped out of the transport tube and climbed into a waiting hover craft.

“Where to, ma’am?” a mechanical voice asked.

In minutes, Z100 had climbed out on her porch that stood miles above ground. She stood at the door of her oval-shaped condo, and placed her palm against the flat box beside the door. A laser strip slid down her palm.

There was a brief hum. “Welcome home,” her house announced.

The clear hatch lifted and she stepped inside. Z100 walked up the floating staircase to her bedroom, and undressed in front of her mirror, turning to the side so she could admire her implants.

Her honey-brown skin and thick, bobbed hair were natural. But her green eyes and full lips had cost a pretty credit—as had her 38 C breasts. Naked, Z100 twisted again to admire her waist and rounded hips, also natural, then slipped on the kimono lying across the bed.

Adjacent to the king-size bed, was a picture window with a stunning view. She walked over to it and stood for a moment looking out over the city’s multicolored lights.

“You look beautiful, Ms. Z100,” the house said in a baritone male voice, “as always. What would like for dinner?”

Z100 walked down the stairs into her living room. Across from the futon and coffee table were three opaque closets. An android stood inside each one, clothed only in white trousers.

She lingered before them, choosing a dinner date. She decided on the third one, Jason, a robot with chocolate skin, exquisitely defined muscles and a nappy cap of hair.

Z100 punched in the definition codes on the curved stand beside the closet: Dinner in 20 minutes. . . Dress casual. Language. . .

At this she hesitated. English tapes sounded so flat lately. But other dialects were worse. The tapes were recorded by under dwellers who were paid only a fraction of a credit for each one. So they were stepping on them—using the original track to produce five, even ten, more tapes. They were given an upgrade today, but it probably won’t make any difference. To hell with it. She typed in: Language, English.

She pushed set and the android stepped jerkily out of the closet, walked past her and up the stairs. From his chip, he knew to pull male clothing from her closet and dress. Minutes later, Jason came down the stairs and sat in the dining room alcove. Another robot began to set the table. The second one had a head with only the semblance of a nose and mouth. Beneath its pink shoulders were a metal torso and limbs.

At times, Z100 longed for a real man, but she’d never mate. In the twenty-fifth century doing so was dangerous. Her line of work made it even more deadly. Tyrolean law said that women and darker peoples were second-class citizens. Women of color had the lowest rungs on this ladder. Poor whites were also assigned lower class citizenship. Once a woman married, all of her credits became her husband’s. And forced marriages, as well as the murders of newly wedded women, were not uncommon.

Entries in this blog

No blog entries have been created