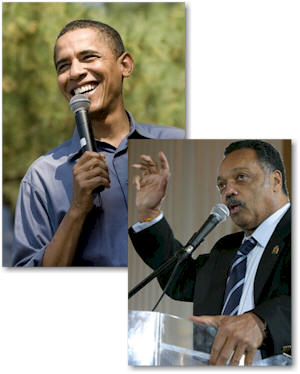 Jesse Jackson, Sr.’s “;live mike” comments about Barack Obama reminds us that there's always someone laying in the cut to divide and conquer black America. For once, Black America seems to be all on the same page in Obama quest to become the nation's (real) first black President.

Remember, the only reason the statements even came to light in the first place was because conservative talk show host, Bill O'Reilly, intended to out Jesse (and swiftboat Barack) on his show last week ' but Jesse came forward first with the apology and it became a non-story.

For O'Reilly, who has made it a full time occupation to sink Obama's election chances, it would have been the "bomb of all bombs" and it would have been dropped ' not out of his mouth but ' from a credible black leader's mouth. It's the kind of bomb that the Republicans are praying would come out against Barack who Rush Limbaugh continues to call, "the Magic Negro." Had this kind of bomb dropped two months ago, Hilary might still be in the race and Jesse would be an honorary Clinton today. Thank God for bad timing. Loose lips, even today, still sink ships.

All you say is, Damn, come on, Jesse!!?? Don't hate the playa-hate the game, the same game that has been run on your daddy and your grand-daddy. Divide-conquer.

This game of divide and conquer of black people at the leadership level is not new. We've seen it so many times that, like a re-run on television, we can tell what's going to come next. After 150 years, we should know the game by now. 150 years ago, Frederick Douglass and Martin Delany had a very ugly public debate about Lincoln's proposed colonization plan (Should we stay or should we go). For those of you who still purport that Lincoln freed the slaves, know that every abolition plan Lincoln considered had a colonization component-voluntary at first, but permanent in Lincoln's mind to resolve America of its "Negro problem." Lincoln was killed before it could be flushed out, but Delany's position was that Blacks should leave, while Douglass maintained we stay and it ruined their friendship.

A half century later, Booker T. Washington suggested we accept segregation as a phase-in to equality. Like Jesse-the other day-W.E.B DuBois thought that Booker T. had lost his mind, and he said so. It started a fifteen year feud where Washington refused to participate in the Niagara Movement and the founding of the NAACP because of DuBois' presence. Booker T. almost singlehandedly shut down the NAACP, choking off its funding. The NAACP only grew and prospered after Washington died in 1915.

DuBois would have a similar public feud with Marcus Garvey, where Garvey called DuBois a "rabid mulatto." Almost a half century later, civil rights leaders Thurgood Marshall, Roy Wilkins and Whitney Young thought direct action protest in the South was suicide, and thought that Martin Luther King, Jr. was crazy, and that Malcolm X was even crazier. But twenty years later when a student of King's ran for President, Black America was determined not to play that game.

Malcolm prot'g', Louis Farrakhan came to Jesse's aid in the middle of Reagan madness, helped bring back hostage, Robert Goodman, from Syria, defended Jesse's "Hymietown" comments, registered to vote for the first time and took on the wrath of the Jewish community-over his solidarity with Jesse, even in the light of a later repudiation. Jesse has had his own "divide and conquer" struggles, first with Al Sharpton, and now with Barack Obama. And he knows the media is always looking to fan the flames of discontent and disunity throughout our community. Jesse is a student of the struggle, now a patriarch in the struggle, who has navigated many a trap. Why fall into this one?

More troublesome than the timing of Jesse's comments is the crudeness of his comments. Of all people, Jesse Jackson should know the historical connotations of castration and the role it has played in the emasculation of black men. "Cutting off his nuts" was usually the crowning glory of a lynching, the aftermath of which led to the dismemberment of their black victim. It wasn't uncommon to see penises and testicles displayed in the offices of civic leaders just 50 short years ago. I saw it for myself some 25 years ago on a trip to the South. The symbolism of castration is every bit as painful as the act itself-to know that someone's manhood was trophied for social sport. Why would Jesse even suggest such a thing-in the middle of the nation's political "hunting season"? If you disagree with Barack on a certain point, just say so-not suggest harm to the man.

While many people have their views about what Jesse is (or ain't), I like him and give him mad credit for getting us to this point in the struggle for political equality in America. For real, y'all-do you really think Barack Obama would be as far as he is if Jesse had not done what he did 20 years ago? We can't forget that. On the other hand, there's no reason for Jesse Jackson to continue to step on his d*ck like he has over the past few years. But don't throw him away yet. He can be the elder statesman of the movement, and play a lesser role with dignity and credibility. However, in his senility, he can't afford to get caught up in a game so many of us have hated for so long. We have to remind Jesse that this is 2008, not 1988, and there's a new player on the field.

Jesse should be shoutin', "Play on, Playa!!" Instead, he's acting as Jill Scott suggested, "Hate on, Hater." That's not a good fit for someone who done so much for black people and the nation. Barack Obama is not a threat to Jesse Jackson, or his legacy. Divide and conquer is the biggest threat to Jesse Jackson and his legacy. If Jesse can't control his hateration, the game wins.